The New York Yankees have activated Phil Hughes to start in today's game against the Tigers.

The Yankees have activated Phil Hughes from the 15-day disabled list, reports Wallace Matthew of ESPN. The Righty will start today's game against the Tigers, opposite Detroit's Max Scherzer.

The Pinstriped Bible: Plan 189 from Outer Space is directed by the Steinbrenner Bros

Hughes pitched seven innings in a rehab assignment on Monday, April 1 in extended spring training. He was placed on the DL to begin the season on February 18 with a bulging disc in his back. He was unable to pitch in any official spring training games prior to the start of the season, but he had thrown several games within the Yankees camp. He was originally scheduled to start for the Yankees AAA affiliate on Saturday. Hughes was 16-13 in 32 starts with a 4.32 ERA over 191 innings for the Yankees last year. Over six seasons with New York, he has a 4.39 ERA in 635 innings. 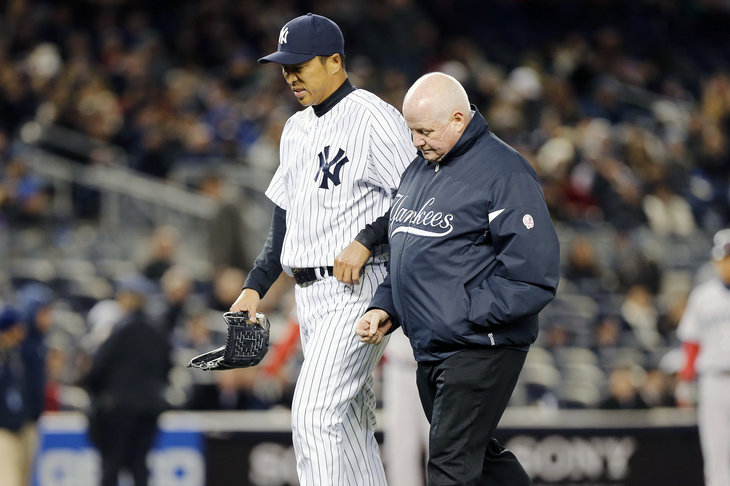 Hiroki Kuroda is hopeful that he'll be able to make his next scheduled start for the Yankees.

Swing man David Phelps was slated to make the start prior to Hughes' activation, but the right is now expected to rejoin the bullpen as the primary long relief option for the Yankees. The Yankees bullpen is in need of the flexibility Phelps can give them after a rough first week of baseball. The Yankees lost Hiroki Kuroda after just 1 1/3 innings in the second game of the season after he was hit in the hand by a line drive off the bat of Boston's Shane Victorino, putting pressure on the bullpen to make up extra innings. As a result, the Yankees bullpen has been heavily employed over these first four games, pitching 16 of the teams 35 innings. Phelps was very effective in the long relief role last season, pitching 42 innings in 22 appearances with a 2.76 ERA out of the Yankees pen.

The Yankees are currently 1-3 on the season and starting pitching has been an issue for them in these first few games. Andy Pettite is the only Yankee pitcher to record a win or pitch more than five innings to this point. Yankees starters currently have a 5.21 ERA, the third highest mark in the game.