The right-hander's stay in Colorado won't last long, as he's drawing trade interest from at least a trio of other clubs.

The Colorado Rockies acquired right-hander Aaron Harang from the Los Angeles Dodgers over the weekend, but quickly demonstrated that they had no desire to keep him on their roster. The Rockies almost immediately designated Harang for assignment, and are now drawing interest on the veteran from at least three clubs: the Red Sox, Twins, and Astros, reports Ken Rosenthal of FOX Sports.

The Harang acquisition was essentially a ploy by the Rockies to unload the $3.2 million salary of catcher Ramon Hernandez. And with the Dodgers agreeing to take on $4.5 million of the $7 million owed to Harang this year, Colorado should have much easier time dealing him for a second time and successfully freeing for themselves a few extra million in payroll. 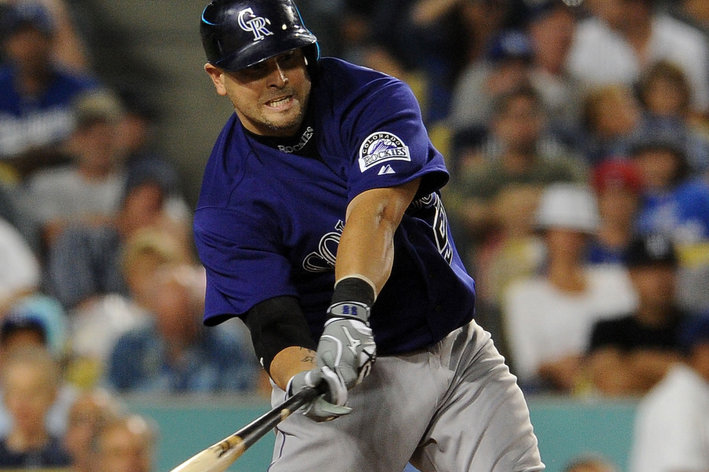 Colorado has at long last found a taker for their veteran catcher.

Harang, 34, posted solid numbers out of the Dodgers' rotation in 2012 -- putting up a 3.61 ERA and 6.6 K/9 in 179⅔ innings -- but was pushed out of the rotation with the additions of Zack Greinke and Hyun-Jin Ryu. The right-hander expressed unhappiness with his move to LA's bullpen on more than one occasion, so a trade seemed inevitable. Considering the $3.5 million he'll be owed by whomever picks him up -- plus the $2 million buyout on his 2014 mutual option -- it's likely he'll get his wish and be put back in a starting rotation.

The Red Sox seem to be a prime candidate to acquire Harang, especially if the MRI results on John Lackey's arm indicate a serious injury. If the Astros acquired him, he'd immediately become the highest-paid player on their roster, which is simultaneously fascinating and kind of sad.