Angels' Jered Weaver out 4 to 6 weeks with broken elbow

The Halos' ace will be out until at least mid-May with a fracture in his non-throwing elbow.

Share All sharing options for: Angels' Jered Weaver out 4 to 6 weeks with broken elbow

The Los Angeles Angels' rotation took a serious hit Tuesday as right-hander Jered Weaver was diagnosed with a broken left elbow that will sideline him for four to six weeks, reports Ken Rosenthal of FOX Sports.

The right-hander injured his non-throwing arm Sunday evening while diving (more falling, really) out of the way of a line drive off the bat of Rangers first baseman Mitch Moreland. Weaver left the game immediately and initially thought he had just jammed or hyperextended the elbow when he hit the ground. Initial X-rays didn't indicate a fracture. 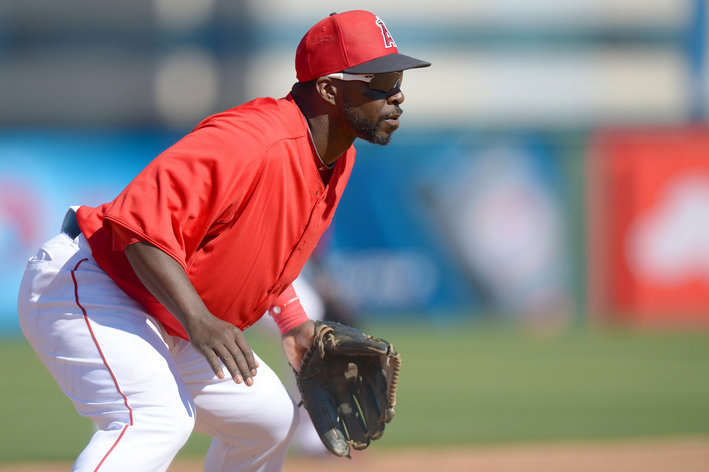 The Halos have re-signed the veteran infielder to a minor-league deal.

However, further testing done on Monday showed that the 30-year-old does indeed have a break in his non-throwing elbow, and he will be on the disabled list for at least the next month as a result.

The Angels' rotation was one of the club's biggest question marks going into the year and now they'll have to survive a prolonged period without their ace. Garrett Richards and Jerome Williams are the most likely candidates to take over Weaver's spot in the rotation while he's out, and it's likely that the pair take turns making spot starts.

Weaver was anything but dominant in his two starts this season, surrendering six runs and walking six in 11 innings of work. The right-hander has been one of the American League's premier starters for the past three seasons, but a precipitous (and ominous) drop in velocity down to the mid-80s was threatening to change his luck this year.

If the Angels want to get through the next month-plus unscathed, they're going to have to hope that C.J. Wilson turns back into the top-tier starter they paid him to be, and that new arms Jason Vargas, Tommy Hanson, and Joe Blanton can step up and stay healthy.

Right-hander Dane De La Rosa, who was acquired from the Tampa Bay Rays a few weeks ago, will take Weaver's spot on the roster and either Richards' or Williams' spot in the bullpen.