The veteran corner outfielder/infielder has come to terms on a minor-league deal with Arizona.

Well, it took a while, but veteran slugger Juan Rivera has finally landed a deal with a new club. Just about a month removed from his surprise release by the New York Yankees, Rivera has inked a minor-league contract with the Arizona Diamondbacks, reports Tyler Emerick of MLB.com.

Rivera will begin his D'Backs tenure getting back up to speed in extended Spring Training games for the next week or so, then will report to one of the club's minor-league affiliates -- likely Triple-A. 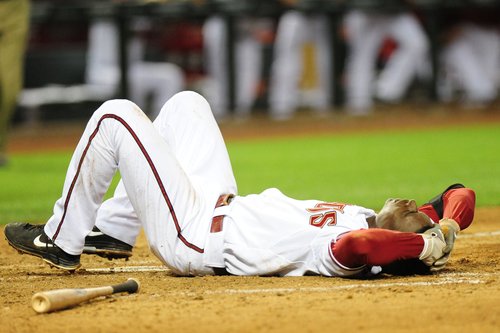 Arizona's rookie shortstop is on the 7-day DL after being conked in the noggin.

Rivera, 34, signed a minor-league pact with the Yankees in January. Despite his down numbers with the Dodgers in 2012, the veteran seemed to be in prime position to man first base for New York on Opening Day in Mark Teixeira's absence. Rivera batted a not-so-impressive .295/.317/.377 in 61 spring at-bats, but started a team-high 13 games at the cold corner.

It was not to be, however. New York signed Lyle Overbay to a similar minor-league deal on March 26, and Rivera was out of a job just two days later.

Arizona is certainly not wanting in slow, thirty-something corner outfielders, but Rivera does give the some more depth should it lose more outfielders to injury. Rookie Adam Eaton is on the DL with an elbow injury and Jason Kubel just returned from a quad strain.