Did you know Mark Teahen was still playing baseball? Because I sure didn't.

UPDATE: The Reds have voided their acquisition of Mark Teahen and sent him back to the Diamondbacks because of an issue with the veteran corner man's shoulder that emerged during his physical, reports Mark Sheldon of MLB.com.

Teahen was only expected to provide some outfield depth for Cincinnati's Triple-A affiliate, so his return to AZ shouldn't have too much of an effect.

ORIGINAL: The Cincinnati Reds have acquired corner utility man Mark Teahen from the Arizona Diamondbacks in exchange for cash or a player to be named later, reports Jack McGruder of FOX Sports Arizona.

Teahen has not appeared in the big leagues since 2011, so his chances of having a large impact on the Reds' roster going are pretty slim. The 31-year-old was a quality player for the Royals for a few years -- hitting .269/.331/.419 and fielding every position but catcher, shortstop, and pitcher in his five seasons with Kansas City -- but his numbers and playing time dwindled once he left Kauffman Stadium in 2010. 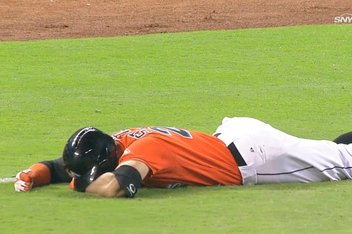 A Grade 2 strain in Giancarlo's hammy is expected to keep him out at least three to four weeks.

The former first-round pick spent all of 2012 with the Washington Nationals' Triple-A club. He batted just .260/.328/.360 with three home runs in an even 500 plate appearances there, a far cry from his days of hitting 18 big flies in just over 400 MLB PAs. Signed to a minor-league deal with the D'Backs over the winter, Teahen was faring even worse early on this year, hitting .211/.318/.254 in 85 plate appearances for the Reno Aces.

It's probably no coincidence that his departure from the D'Backs Triple-A affiliate comes at the same time as the club's signing of fellow corner infielder/outfielder Juan Rivera to a minor-league deal.