The New York Yankees have discussed acquiring third baseman Chris Nelson from the Colorado Rockies, but don't appear to be all that interested in the infielder, reports Andy McCullough of the Newark Star-Ledger.

More Yankees: Almost Everyone Gets on Base

Nelson, 27, began the year as the Rockies' starting third baseman, but was designated for assignment on Sunday after getting off to a slow start. Even if he had gotten off to a solid first month for the club, Nelson's days at the hot corner in Colorado would have been numbered with top prospect Nolan Arenado waiting in the wings. 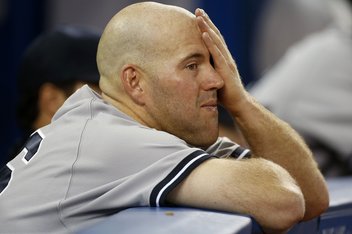 The Greek God of Balky Backs is on the DL with a "lumbar spine sprain."

Like most Colorado's hitters, Nelson's numbers are greatly skewed by playing half his games in Coors Field. He boasts an OPS almost .200 points higher at home than on the road, sending a very worrisome signal to clubs who may be interested in taking him out of Denver.

The Yankees have received incredibly poor production from the left side of the infield in the early goings this year. Both Jayson Nix and Eduardo Nunez have slash lines filled with twos across the board -- i.e. .219/.261/.266 -- which is bound to come back to bite the Yankees eventually if they don't do something about it. GM Brian Cashman has stated that the club is content with Nix and Nunez for the time being, but there's no way the team won't add another infielder if the right deal comes along.