Detroit is now down two veteran relievers, as Coke battles his way through a groin strain.

The Detroit Tigers have lost their second reliever to injury in as many weeks, sending left-hander Phil Coke to the 15-day disabled list with a strained left groin, reports Jason Beck of MLB.com.

Coke, 30, has been dealing with the groin injury for almost a week. Like they did with Octavio Dotel and his ailing right elbow last week, Detroit held out as long as they could before adding Coke to the disabled list. The veteran lefty last pitched on Thursday against the Royals -- in which he took his second consecutive loss -- so his DL stint is retroactive to April 27.

Strasburg's arm not falling off 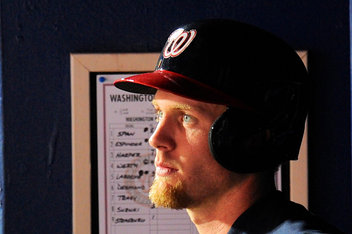 Nats GM Mike Rizzo says that his prized right-hander's arm is "structurally perfect" despite a recent bout of forearm tightness.

A huge part of the Tigers' postseason success last year, Coke has struggled out of the gate this season. The southpaw has made just nine appearances on the young season, but is responsible for three of his team's ten losses and has allowed nearly a run per inning.

A lot of his troubles can be attributed to manager Jim Leyland's insistence on having Coke face right-handed batters despite his woeful career numbers against them. Righty batters are hitting .300/.372/.439 against Coke in his six big-league seasons, and are demolishing him to the tune of .333/.429/.667 in 21 PAs so far this year. Lefties, on the other hand, are batting just .154/.250/.154 in 17 PAs.

Taking Coke's spot in the bullpen is 24-year-old Jose Ortega. The southpaw has been invincible at Triple-A Toledo so far this season, allowing no earned runs and fanning 19 batters in 14 frames. Ortega got a tiny cup of coffee with the Tigers last year, so he's not a complete noob, but given his inexperience he'll probably take on a long relief/mop-up role to start off. Starter turned reliever Drew Smyly will continue to pitch as the club's lefty setup man.