Atlanta got some news on their injured setup man Tuesday, as Venters made 75 throws with no residual effects in his elbow.

When Jonny Venters went down with an elbow sprain in late March, it appeared as though a second Tommy John surgery could be on the horizon for the left-hander. The 28-year-old made an ominous visit to Dr. James Andrews on April 2, but instead of a surgery date he received a platelet-rich plasma injection in his arm was prescribed four weeks of rest in the hope that the injury would heal itself.

More Braves: Who's Catching This Year?

While he's definitely not out of the woods just yet, the early returns from his month of rest seem promising. The southpaw began a throwing program on Tuesday -- making 75 throws from 60 feet in sets of 25 -- and gave no indication of discomfort or pain after the fact. Venters said that the session was "encouraging" because he remembers that the first time he injured his UCL -- way back in 2005 -- he was unable to throw even 45 feet without feeling it. 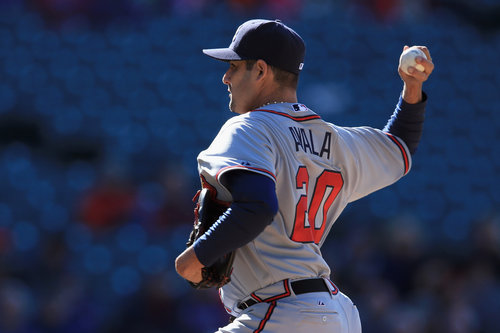 Atlanta has placed the veteran right-hander on the DL with anxiety issues.

Venters also expressed a hope that he'll return to the Braves by the end of May, but knows full well that any timetable hinges on how his arm responds when he amps up the velocity and actually gets back on a mound.

Even if Venters is able to return to the club by the end of the month, there's also the chance that his elbow problems could resurface. Dodgers right-hander Chad Billingsley rehabbed all winter in an attempt to circumvent surgery, but just ended up losing several months of recovery time when he eventually went under the knife in mid-April.