New York has traded for some much needed shortstop depth.

Gonzalez, 30, broke camp with Chicago this season but was designated for assignment and outrighted back to Triple-A when the club acquired Julio Borbon almost three weeks ago. The Venezuelan infielder batted .217/.269/.391 in 26 plates appearances, essentially manning second base until Darwin Barney returned from the DL. 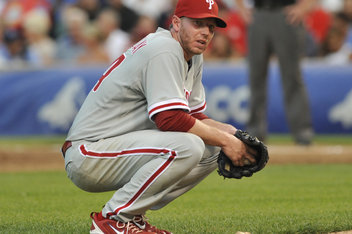 The Doc has become the patient...

With Eduardo Nunez out nursing a sore rib cage and Derek Jeter sidelined indefinitely, the Bombers have had to rely primarily on Jayson Nix at short and new hire Chris Nelson at the hot corner for the last three games. The club is so depleted on the left side of the infield that Vernon Wells played an inning at third Wednesday night. Gonzalez isn't going to add much in the way of production above and beyond what they're already getting -- he's a quintessential replacement-level player -- but he is one more warm body to man short or third should they lose anyone else to injury.

Gonzalez has parts of seven big-league seasons under his belt, and actually broke into the big leagues as a Yankee way back in 2007. The veteran infielder appeared in at least 100 games for three straight seasons -- 2009-2011 -- but made it into just 24 games last year with the Rangers.

Because Gonzalez was bumped off the Cubs' 40-man roster before he was moved to New York, the Yankees are not required to make a corresponding roster move at the moment. However, when/if they do call him up, someone else will need to be moved down.