The Halos ace is still a couple weeks from returning to Anaheim, but he's taken that first big step in his recovery.

Not only did the Los Angeles Angels actually manage to win a game on Thursday, but they also got some good news on their rehabbing ace. Jered Weaver threw off a mound for the first time since breaking his non-throwing elbow on April 7, and felt "really good" in his brief return to the hill, reports Alden Gonzalez of MLB.com.

Weaver tossed just 28 pitches -- all fastballs -- at 90 percent effort, so he's still a ways from helping the Angels out of their early season funk, but any sort of positive news out of Orange County is worth clinging on to at this point for Halos fans. Manager Mike Scioscia said that needs at least three more painless bullpen sessions -- one coming every other day -- before he can begin a minor-league rehab assignment. 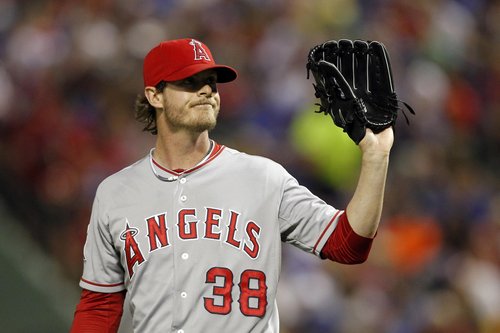 The Angels got one of their injured relievers back, but are still waiting on three more DL-ed guys: Ryan Madson, Sean Burnett, and Kevin Jepsen.

If all goes well from this point forward, the 30-year-old should return to the Angels' rotation by late May. The two-headed monster of Garrett Richards and Jerome Williams have been filling in for Weaver in his absence, but have not pitched very well.

Weaver made just two starts before going down with his freak elbow injury, but those pair of starts were enough to raise serious concerns about his precipitous drop in fastball velocity: the right-hander's average fastball came in at around 88 miles per hour, dropping him below 90 mph for the first time in his career. Weaver has been a perennial Cy Young candidate over the last few seasons, but whether he can still be effective with diminished velocity remains to be seen.