The Nats' starting catcher is back on the DL with another hamstring strain.

Share All sharing options for: Wilson Ramos injury: Nationals catcher back on DL

More Nats: Detwiler Getting 2nd Opinion on Back

The move is Ramos' second stint on the DL this year, both of them coming as a result of a balky hamstring. The catcher aggravated the leg injury Wednesday night while knocking a hard single to left-center, and had to be removed from the game after hobbling to first base. Ramos later indicated that the muscle started acting up on a double earlier in the contest. 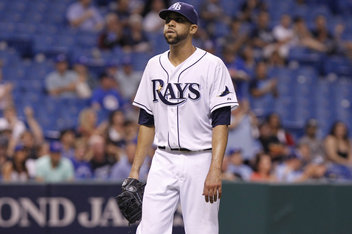 The Rays will be without their ace for the next few weeks.

Ramos will head back to Washington this weekend to be examined further by team doctors, and is expected to get an MRI at some point. The re-injury is a tough break for the young-ish catcher, as he missed most of 2012 with a knee injury and was really just getting back into the swing of things. Ramos is batting .250/.308/.438 with two home runs in 52 plate appearances.

Jhonatan Solano has been recalled from Triple-A to take Ramos' spot on the roster. He will likely set up shop behind Kurt Suzuki as the club's back-up catcher until Ramos can return. The 27-year-old backstop was off to a poor start at Syracuse, but is a solid .293/.326/.512 hitter in the very small sample of 15 big-league games over the last two years.