Jair Jurrjens will get the ball for the Orioles today as Baltimore looks to find a replacement for the injured Wei-Yin Chen.

The Orioles have called up starter Jair Jurrjens and the former Brave will make his Orioles debut today against the Tampa Bay Rays, writes Brittany Ghiroli of MLB.com.

signed Jurrjens to a minor league deal after the 27-year-old was released by the Atlanta Braves in November. He made ten starts for the Braves in 2012 and struggled badly, posting a 6.89 ERA and walking almost as many batters as he struck out with a 3.4 BB/9 and a 3.5 K/9 rate. He lost his starting job on July 22 and spent much of the season in AAA. He was an All-Star in 2011, finishing the season with a 2.96 ERA over 152 innings. 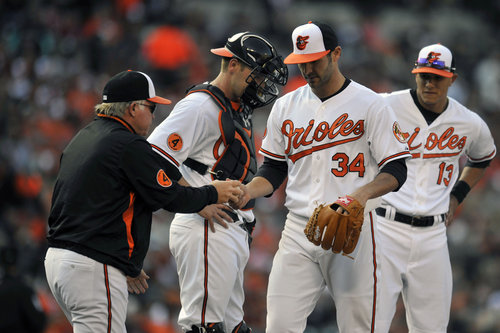 The O's are off to a great start, but may not be able to sustain it without some outside pitching help

At AAA Norfolk this season, Jurrjens has a 3.14 ERA over 51 2/3 innings with 36 strike outs and 15 walks. With the injury to Wei-Yin Chen leaving the Orioles rotation extremely thin, Jurrjens will get a chance to earn a more permanent place with the big league club in this start. The Orioles have already been forced to use Freddy Garcia as a regular part of their rotation in the absence of Miguel Gonzalez. Elbow issues have kept top prospect Dylan Bundy off the mound and out of the running for spot starts early this season and the other stop-gap options, Steve Johnson and Zach Britton, have struggled when given the opportunity to start this season.

The Orioles are an impressive 23-18, but still rank just third in the ultra-competitive AL East. A return to his 2011 form from Jurrjens would be a great boost for their wounded rotation, but they are also rumored to be seeking a top-tier starter. Bundy and fellow top prospect Kevin Gausman are supposedly off the table in such talks but that hasn’t stopped people from kicking around names like David Price, Cliff Lee and Matt Garza.