The Blue Jays Josh Johnson is ready to begin working his way back from the bicep injury that has sidelined him since late April.

Johnson was placed on the 15-day DL on April 21 after experiencing pain in his right bicep. There were initial concerns that the injury may have been related to damage in his elbow tendons, but MRIs reveal no such issues. Even so, the pain has kept Johnson from throwing longer than expected and he will require several rehab starts before returning to the big league club. He is expected to go three innings in this first outing and build from there. 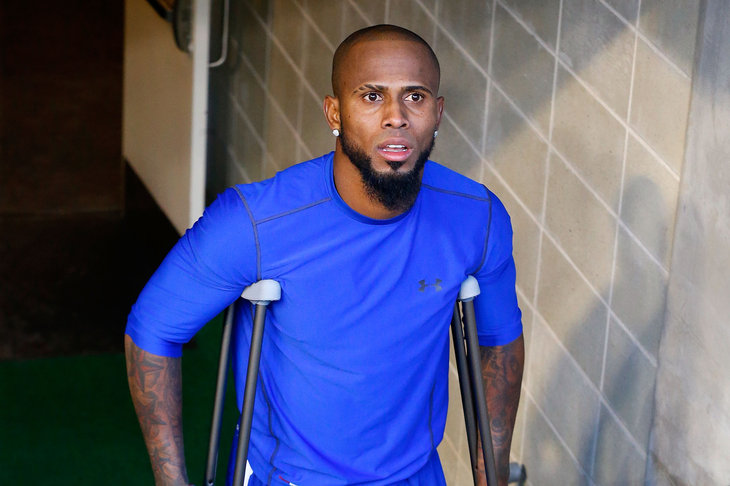 Sergio Santos, Melky Cabrera, Josh Johnson, and Jose Reyes all have had recent developments with their injuries.

Johnson struggled to start the season, with a 6.86 ERA in 19 2/3 innings over his first four starts and an uncharacteristically high walk rate of 4.1 BB/9. Johnson is in his first season with the Blue Jays following the blockbuster deal with the Marlins that brought him to along with Jose Reyes, Mark Buehrle, and Emilio Bonifacio. It could well be his only season with the Blue Jays as well since the 29-year-old righty will be a free agent at the end of the season.

has not profited as much as expected from that mega-trade and injuries have played a large part in the disappointing results. In addition to missing Johnson for what is almost certainly going to be at least six weeks total, the Blue Jays have lost Jose Reyes to an ankle injury and the shortstop is not expected to return until July. Other imports like Buehrle, Bonifacio and free agent signee Melky Cabrera have remained healthy but failed to perform. Buehrle has a 6.33 ERA over nine starts. Bonifacio is hitting just .196/.224/.324 and Cabrera is batting .283/.319/.376 for a wRC+ of 87.

The Blue Jays are currently last in the AL East with a record of 17-26. If there is any hope for a turnaround this season, it will certain require a healthy return from Johnson. In his career he has a 3.23 ERA over 148 starts and the Blue Jays need him to be that player once again.