Atlanta has now lost two lefty relievers to the procedure in as many weeks.

Atlanta Braves reliever Eric O`Flaherty is scheduled to undergo Tommy John surgery on Tuesday, and will miss the remainder of the season as a result, reports David O'Brien of the Atlanta Journal-Constitution. Dr. James Andrews will perform the operation.

More Braves: Teheran Getting it Done with Different Approach

The writing has been on the wall for O'Flaherty since the weekend, when he was diagnosed with a torn UCL in his throwing elbow. The southpaw is the second Braves reliever to go under the knife in the last week -- joining fellow lefty Jonny Venters -- leaving Atlanta's bullpen in tatters. 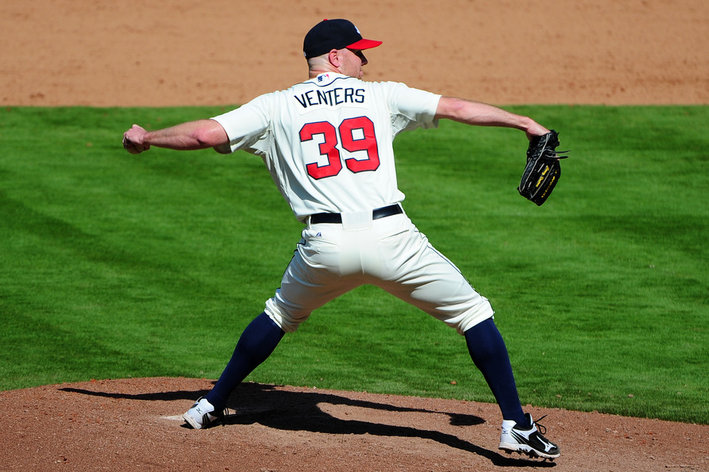 The Braves can't catch a break on the Tommy John front.

The lefty combo of O'Flaherty and Venters combined to throw 272⅓ innings of relief for the Braves over the last two years, each posting a stellar earned-run average in that span: 1.31 ERA for O'Flaherty, 2.39 ERA for Venters. O'Flaherty was off to another strong start this year before tearing up his elbow, putting up a 2.50 ERA in 18 innings of work.

The Braves still have Craig Kimbrel around to anchor the bullpen, but relative newcomer Luis Avilan is now the only southpaw left in the big-league relief corps. Rookie right-hander Cory Rasmus was called up in O'Flaherty's stead, but it's likely that Atlanta will eventually look for a long-term replacement on the trade market. Ken Rosenthal of FOX Sports speculates that Miami Marlins left-hander Mike Dunn -- who the Braves traded away in 2010 -- would be an "ideal" solution.