The right-hander's recovery is going so well that the team is contemplating putting him in the rotation.

Share All sharing options for: Cardinals notes: Chris Carpenter could return by July

First, he was contemplating retirement. Then he was coming back, but only as a late-season reinforcement out of the bullpen. Now, it seems that Chris Carpenter might actually make his way into the St. Louis Cardinals' starting rotation by sometime in July, reports Scott Miller of CBS Sports.

The 38-year-old right-hander has been throwing "rigorous bullpens" of up to 80 pitches, and has not experienced any setbacks in his recovery thus far. When news broke in February that the nerve issue in his neck and shoulder was continuing to be a hindrance, there seemed to be no chance that Carp would take the mound in 2013, but now it's more a matter of when, not if.

Garcia done for the year 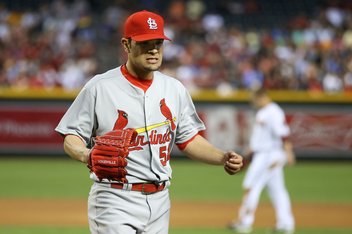 Jaime Garcia's shoulder has finally given out completely.

Carpenter is scheduled to throw an extended bullpen session today (Thursday), and if all goes well he could face live hitters as soon as next week. GM John Mozeliak said that Carp's progress is "very encouraging," but would not give a target return date for fear of a setback.

The right-hander would be a welcome veteran addition to a youth-heavy rotation in St. Louis. With Jake Westbrook incurring a setback in his rehab, and Jaime Garcia sidelined for the year with a shoulder injury, St. Louis has had to rely on a small fleet of young starters -- Shelby Miller, Lance Lynn, John Gast, and Tyler Lyons -- to keep the team atop the NL Central. The quartet has pitched incredibly well thus far, but adding another established arm certainly wouldn't hurt the rotation.