The All-Star second baseman is out with a "very mild" oblique strain.

The Philadelphia Phillies have placed second baseman Chase Utley on the 15-day disabled list with a mild oblique strain, the team has announced.

Utley was scratched from the lineup on Tuesday after feeling a "burning sensation" in his ribcage during batting practice, and an MRI taken Thursday revealed the discomfort to be a Grade 1 tear of an oblique muscle in his right side.

He is eligible to come off the DL as early as June 5 because he's been on the sidelines since Tuesday. As his strain is being considered "very mild," manager Charlie Manuel believes the veteran infielder will be ready to go when that day rolls around. 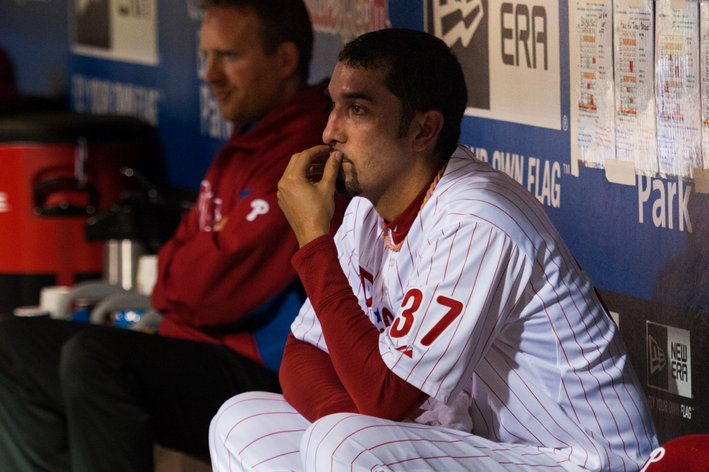 The right-hander is sidelined with a back strain.

While the Phillies will certainly miss Utley's bat over the next few weeks, the team is probably grateful that the DL stint has nothing to do with his balky knees, which have cost the 34-year-old significant time over the last two seasons.

Philadelphia purchased the contract of utility player Michael Martinez from Triple-A Lehigh Valley to take Utley's spot on the active roster. Martinez, 30, is a solid defender but boasts nothing in the way of offensive production. The switch hitter is batting .239/.306/.284 in 121 plate appearances this season, and has even worse numbers at the dish in parts of two seasons with the big-league club.