Nationals second baseman Danny Espinosa has been playing with a broken wrist for over a month.

After playing with discomfort for over a month, Nationals infielder Danny Espinosa underwent additional tests which revealed a broken bone in his right wrist, reports Amanda Comak of the Washington Post. Despite this new information, Espinosa hopes to avoid the disabled list.

The injury occured on April 14 when Espinosa took a Paul Maholm fastball off the wrist. Initial tests did not reveal the break because inflammation in the area obscured the X-ray images. On Friday, the 26-year-old underwent a full CT scan which was able to identify the break.

Espinosa has been struggling this season, hitting just .163/.196/.291 in 149 plate appearances with 40 strike outs and just four walks. His issues did not begin when he was hit with the pitch by Maholm however. Prior to April 14, he was hitting just .175 with a .564 OPS. Steve Lombardozzi will play second in Espinosa's absence, but the back-up has only fared slightly better this year with a .242/.265/.316 line for the season. The team has also called up utility infielder Jeff Kobernus to give them extra depth in Espinosa's absence. Kobernus has been hitting the ball well at AAA this season with a .333/.378/.420 batting line for the Syracuse Chiefs. Reliever Yunesky Maya has been designated for assignment to make room fro Kobernus on the Nationals roster. 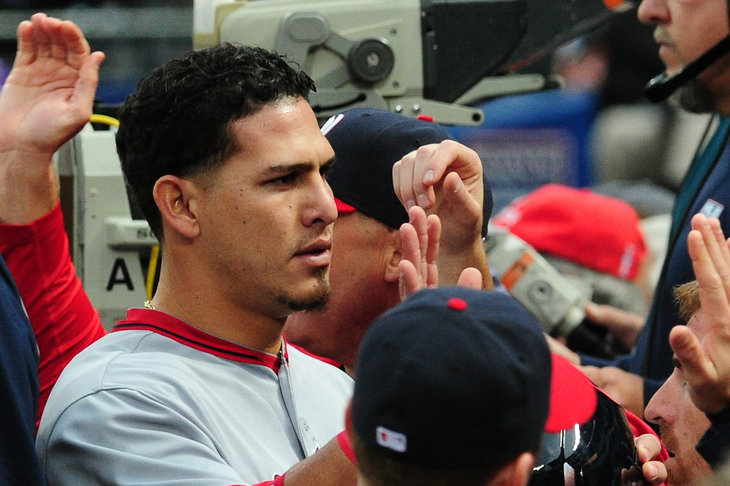 The Nats' starting catcher is back on the DL with another hamstring strain.

could also give top prospect Anthony Rendon a chance at the position if Espinosa needs to miss significant time. The 23-year-old showed some promise in a short stint with the team earlier this season, hitting 240/.367/.280 in 30 plate appearances between April 21 and May 2. Rendon is a third baseman but the Nationals have gotten him some exposure to second at AA Harrisburg this year, playing him there in five games so far.

Espinosa will stop all baseball activities for several days in hopes that the bone can completely heal. Bone chips will remain even after the bone has healed but the doctors do not believe this would cause additional pain, so removal of the chips appears to be unnecessary. If several days of total rest do not help ease the discomfort the team will consider placing Espinosa on the DL at that point.