Chicago has swapped a righty-hitting outfielder for a lefty in the hopes that Sweeney can have better luck at the plate.

The Chicago Cubs are expected to call up veteran outfielder Ryan Sweeney on Monday and demote Dave Sappelt to Triple-A, reports Carrie Muskat of MLB.com.

Sweeney, 28, signed a minor-league deal with the Cubs on April 2, just a few days after he was released by the Red Sox. He battled a host of injuries with Boston in 2012, but seems to be in perfect health now.The lefty-swinging outfielder tore up Triple-A pitching during his month in the Pacific Coast League, batting .337/.396/.627 with six home runs for the Cubs' Iowa affiliate. 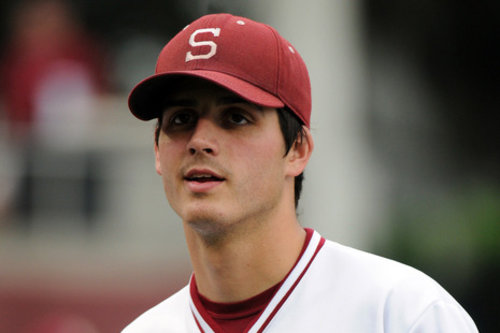 Chicago has narrowed its top pick in June's draft down to the best pair of college arms available.

Sappelt served as a platoon partner of sorts for center fielder David DeJesus, but did not hit well through the first month of the season. Despite having the platoon advantage in over 75 percent of his plate appearances, Sappelt was batting just .178/.229/.222 with no home runs in 48 plate appearances.

Sappelt put up much better numbers in a similar role the last month of 2012, so the Cubs have to hope he can turn things around in Triple-A and eventually make his way back to Wrigley.

With Sweeney's lefty bat on the bench, the club loses a platoon guy in center but gains one for Alfonso Soriano in left field. The Cubs now have four lefty outfield bats on the roster with Sweeney joining DeJesus, Nate Schierholtz, and Julio Borbon.