Atlanta finally has its starting catcher back in the lineup.

Watch out, world, the Atlanta Braves get their real starting catcher back tonight. After missing the season's first month while rehabbing his surgically repaired right shoulder, Brian McCann will be in the Braves' lineup Monday for their series opener in Cincinnati, reports Andrew Simon of MLB.com.

McCann, 29, underwent surgery to repair a torn labrum in his right shoulder in October, and has been on the road to recovery since then. The six-time All-Star had a career-worsts all around in 2012 -- .230/.300/.399 in 121 games -- but McCann and the team are hopeful that his bum shoulder was to blame for the subpar numbers. 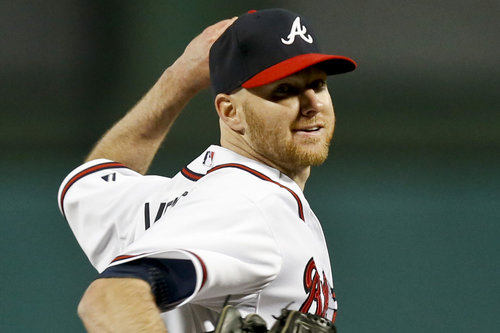 With Gavin Floyd, Chad Billingsley, and Jason Motte all lost to Tommy John, Jonny Venters is now a man on an island in his elbow rehab.

Filling in for the lefty slugger has been rookie backstop Evan Gattis, who has put up McCann-like production in his first month of big-league action. Though his last two weeks have not been quite as productive as the first two, Gattis is still batting .261/.307/.565 with seven big flies through 25 games.

When the club first learned that McCann would spend April on the DL, Gattis was the likeliest candidate to head back to Triple-A when their All-Star backstop returned. With the rookie's hot start, however, the club has decided to carry three catchers (for the time being) and demote utility infielder Tyler Pastornicky to Gwinnett instead. Gattis will probably split reserve duty with Gerald Laird and could see some time at first or in right, but may eventually head back to Triple-A when Jason Heyward returns later this month.