With Andrew Bailey already on the DL, Boston is now down two closers.

Update: Hanrahan will officially be placed on the disabled list by the Red Sox. He is reportedly suffering from inflammation in his arm, but does not have any structural damage. That is good news for Boston, who can likely expect him to be back not long after he is eligible to return.

The Boston Red Sox are playing really good baseball at the moment, but may run into a little more trouble closing out games over the next couple weeks. Joel Hanrahan exited Monday night's game with a right forearm strain (two batters after giving up the game-tying home run) and is scheduled for an MRI on Tuesday, reports Alex Speier of WEEI.

Hanrahan has dealt with forearm issues in the past -- i.e. early 2010 -- but the veteran right-hander told reporters that he'd "never felt anything like this before" and that he "couldn't take it anymore" after issuing a walk to Josh Willingham. Not exactly an indication that he'll be returning anytime soon. 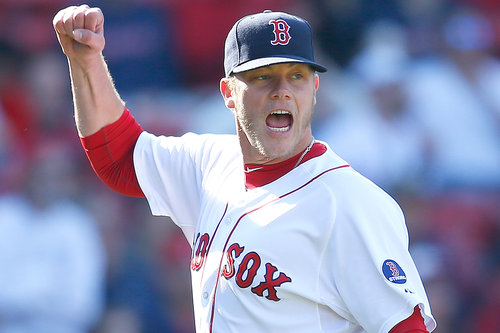 Boston's closer could be back as early as next Tuesday if his biceps heal.

Hanrahan already missed the second half of April with a hamstring strain, so its not as though the Sox haven't learned to get on without him, but last time they had Andrew Bailey as a solid backup option. With Bailey on the DL, Boston will likely go with Koji Uehara in the closer role for the time being. While Uehara doesn't have Proven Closer™ credentials, he shouldn't have too much trouble taking over the ninth.

Red Sox fans can at least take comfort knowing that they don't have to rely on Alfredo Aceves or Daniel Bard to get them through the final three outs this year.