The Toronto southpaw had to be taken off the field on a stretcher.

Share All sharing options for: J.A. Happ injury: Blue Jays starter hit in the head with a line drive

Toronto Blue Jays starter J.A. Happ took a line drive off his head in the second inning against the Tampa Bay Rays and had to leave the game on a stretcher.

Desmond Jennings was at the plate for the Rays and lined the ball right of Happ's head. The southpaw went down immediately and was in obvious pain, as blood could be seen on the side of his head. 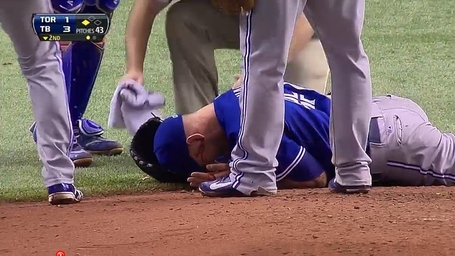 Happ received medical attention before being strapped on to a stretcher and taken out of the game. Jennings ended up on third base with a triple, and Brad Lincoln relieved Happ for Toronto.

Happ's injury looked incredibly serious and scary. The situation is reminiscent of the line-drive off the head that Arizona Diamondbacks starting pitcher Brandon McCarthy took off his head as a member of the Oakland Athletics.

Doctors declared McCarthy in a "life-threatening situation" after his injury, and the starter needed to undergo brain surgery. There is no word on Happ at the moment, but our thoughts are with the pitcher.