Marlins trade rumors: Ricky Nolasco is on the block and he knows it

The 30-year-old starting pitcher likely won't be with the team for long.

Share All sharing options for: Marlins trade rumors: Ricky Nolasco is on the block and he knows it

The Miami Marlins are likely to have another fire sale as the trade deadline approaches, if history serves us anything.

Two Marlins we expect to pop up in trade rumors for the next month are Giancarlo Stanton and Ricky Nolasco because 1) they're both quite good while Miami is quite bad and 2) Miami could get a haul and might actually be able to turn that woeful nightmare of a team around.* 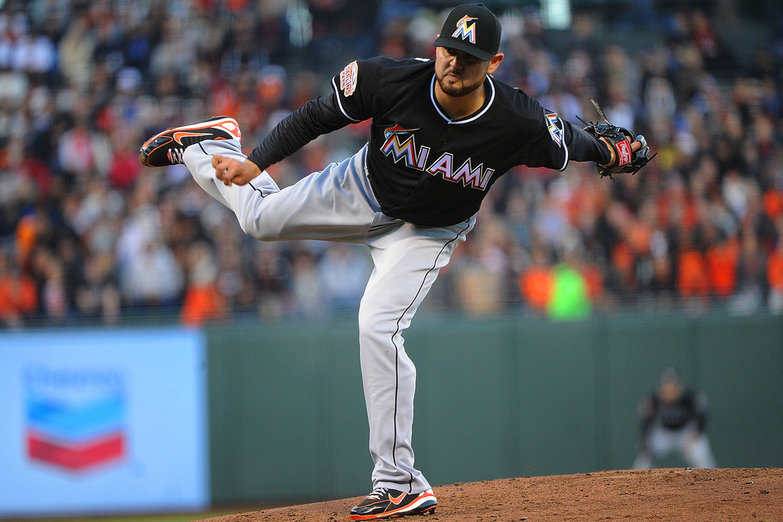 Nolasco spoke with reporters yesterday, addressed the speculation, and said he's fully aware of his situation. Joe Frisaro quotes him:

"I know what’s going on, talking to my agent and stuff like that," Nolasco told a small group of reporters on Thursday.

I’m just going to block that out. I’m trying to stay level-headed, and I’m just trying to throw the ball well. Things are out of my control right now, so I’m trying not to think about them."

Nolasco, 30, is in the midst of one of the best seasons of his career -- certainly adding to the possibility of interested teams:

Frisaro notes that Nolasco has been connected with the Orioles, Yankees, and Giants. Just this morning we posted a report that has the Orioles "aggressively pursuing" starting pitchers, so they could certainly make sense, depending on what they're willing to give up.

As for the Giants, Nolasco wouldn't hate pitching at AT&T:

"I think it would help anybody to be able to pitch in a place like this, when the crowd is behind you, it’s huge," Nolasco said. "I think anybody would like that. I don’t think anybody would be disappointed to come to San Francisco." As for AT&T Park, the right-hander added: "I like everything about this place. The mound is nice. It’s a good place to pitch. The crowd is great. Great team. What’s there not to like?"

I asked Grant Brisbee of McCovey Chronicles if the Giants might have anything readily available to give up in a potential trade. His answer was pretty direct: