Marlins trade rumors: Giancarlo Stanton not up for trade, supposedly

On one hand it makes sense to build a team around Stanton. On the other, Marlins.

Share All sharing options for: Marlins trade rumors: Giancarlo Stanton not up for trade, supposedly

The Miami Marlins are in no hurry to trade Giancarlo Stanton and intend on building around him instead, according to Joe Frisaro of MLB.com:

... when you peel back the speculation, and you explore the actual facts, you will find that in Stanton’s case, the 23-year-old is not on the market. Taking it a step further, he might not be for quite a while, meaning at least another couple of years.

According to two well connected sources, the Marlins consider Stanton as a building block, not a trade chip. 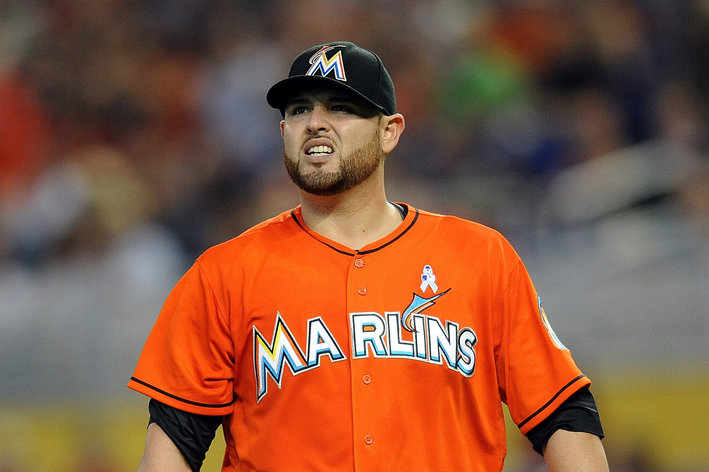 The 30-year-old starting pitcher likely won't be with the Marlins for long.

Hey, it makes sense. The Marlins are a young, terrible team with little talent and could certainly build around a potential megastar like Stanton.

Except for one thing: Stanton has made a very public display of displeasure with the club following the monster Reyes/Johnson/Buehrle trade to the Blue Jays, and it's not hard for him or me or anyone else with sense to connect the dots.

Frisaro makes the same connection and says Stanton won't sign an extension with the Marlins (not that a long-term deal would put these trade rumors to rest):

Indications are Stanton isn’t ready to accept a long-term deal with Miami, and perhaps that will be his stance for months or years to come. If and when that happens, the team will decide which direction they will go.

Remember, Stanton is still under club control, and he is making $537,000 this season. A bargain. There is no urgency to move him. He will reach arbitration next season, but the slugger isn’t eligible for free agency until after the 2016 season.

The Marlins are theoretically in rebuilding mode and Stanton would command a significant haul of prospects in any trade. I asked Michael Jong of Fish Stripes why the Marlins would insist Stanton wasn't going anywhere, and he said Frisaro's report has merit:

Giancarlo Stanton simply isn't likely to be traded this year because the Marlins will not be able to get good value for him. He provides too much trade value for any team to be willing to offer a fair package. Any potential trade offer would have to include multiple top 10 or 20 prospect talents, and the few teams who have that are unwilling to offer so much for one player.

Welp, that makes sense, except for one thing -- the Marlins have shown little if any foresight of Jong's depth when selling off other players. Why stop now? What's changed between the megatrade last November and this moment? If I'm a Marlins fan, I wouldn't hold my breath hoping that Stanton stays.

What do you think? Does Stanton get traded this season? Comment below.