Many throughout the game expect the right-hander to be traded very soon as the Cubs begin their fire sale.

Heyman adds that the Toronto Blue Jays and Boston Red Sox could also be pursuing Garza, and Patrick Saunders of the Denver Post reports that the Colorado Rockies are also interested. 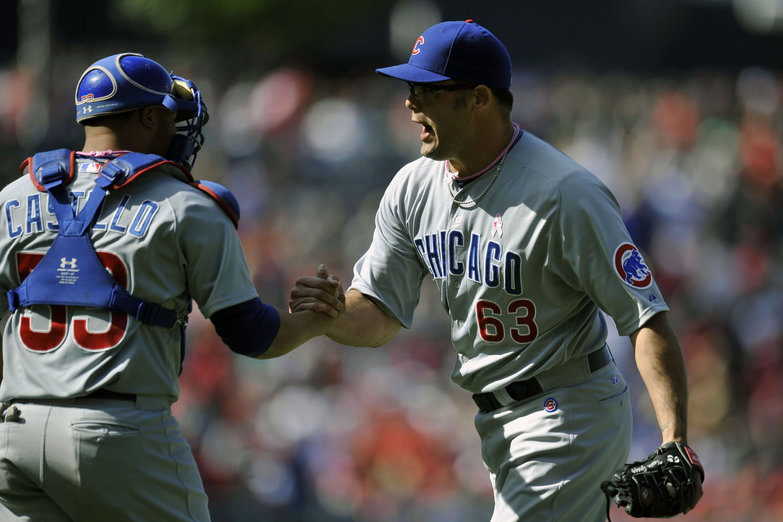 After some key bullpen injuries, the Braves are looking to acquire some fresh arms like Cubs' closer Kevin Gregg.

If that's not enough, MLB.com's Carrie Muskat added that the Washington Nationals and Philadelphia Phillies had scouts at Garza's start on Thursday, joining representatives from the Dodgers, Orioles, and Blue Jays.

While it has been clear for a while that the Cubs will be in full-on sale mode this summer, the Garza market seems to have developed quickly as teams hope to be able to land an established rotation piece with more than a month to go before the trade deadline.

Nick Cafardo of the Boston Globe expects Garza to be dealt well in advance of July 31st, along with pitchers like the Astros' Bud Norris and Marlins' Ricky Nolasco, who are each drawing significant interest. Brewers ace Yovani Gallardo, who has been the subject of rumors throughout the week, will likely not be dealt (if at all) until right before the deadline, and people throughout the game expect Nolasco and Garza to be the first dominoes to fall.

Nolasco, who is pitching tonight in Miami, is also receiving interest from the Dodgers, Padres, Giants, and Orioles, with San Diego and Los Angeles seeming like favorites to acquire him. The Marlins have been in talks with many teams for days about the right-hander, and a deal is expected to occur relatively soon.

Now that Garza talks are known to be taking place at the same time, the destiny of the two pitchers will likely be determined by each other, as the loser of the Nolasco sweepstakes will likely ramp up their pursuit of Garza, and vice versa.

At this point, there is no clear favorite to acquire Garza, and what will seem like thousands of rumors will come floating through the baseball world between now and when an actual trade occurs. The 29-year old, who is a free agent after the season, has impressed teams in eight starts on the season, posting a 3-1 record and 3.83 ERA in 49.1 innings of work.