The Baltimore Orioles have acquired starter Scott Feldman and catcher Steve Clevenger from the Chicago Cubs in exchange for right-handers Jake Arrieta and Pedro Strop, MLBDailyDish's Chris Cotillo has confirmed. Keith Law of ESPN.com was the first to report the move, and adds that the Cubs will receive $388,100 in international signing slot money as well. 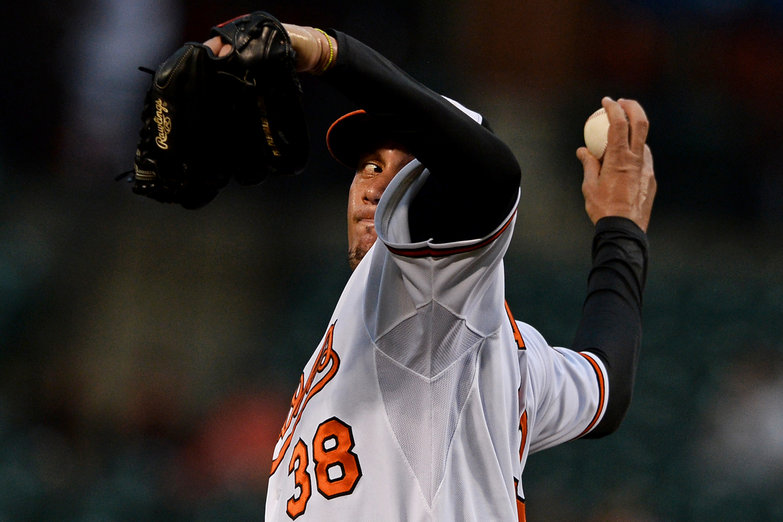 Feldman, 7-6 with a 3.46 ERA in 15 starts on the season, was one of many players that the Cubs have been shopping in recent days along with Matt Garza and Kevin Gregg.

Clevenger, a 27-year old Baltimore native, was placed on the trading block within the last 24 hours after a disagreement with the Cubs over his medical situation, a source has confirmed to MLBDailyDish.

After being recently activated from the 60-day disabled list, he asked for a second opinion on the injury (which he is entitled to as a 40-man roster player) within the last 24 hours and was immediately put on the trading block and told to pack up his gear.

The Orioles, reportedly interested in Clevenger for the last couple of years, jumped on the opportunity to acquire him as soon as he became available. Clevenger was optioned to Triple-A Norfolk, where he will serve as depth behind Matt Wieters and Taylor Teagarden.

Arrieta, recently drawing significant interest from the San Diego Padres in recent days, will join Triple-A Iowa. At 27 years old, the Cubs hope that a change of scenery will help the promising right-hander reach his full potential with a new organization. In 69 major league appearances since 2010, Arrieta is 20-25 with a 5.46 ERA, and has spent much of the 2013 season with Triple-A Norfolk.

Strop, who has posted a 7.25 ERA in 29 appearances on the season, will join the Cubs' big-league bullpen later in the week. The 28-year old is coming off a superb 2012 season in which he went 5-2 with a 2.44 ERA, and hopes to put his struggles behind him with his new team.

With the first big deal of the month done, the Cubs will now likely focus on moving Garza, who is drawing interest from many teams. The Orioles, who may have been the frontrunners to acquire Norris, are likely out of those sweepstakes, and the Padres will have to turn elsewhere in their pursuit of a young starter with Arrieta off the board. With San Diego very interested in both Arrieta and Garza, the Cubs could flip Arrieta in a package deal with the Padres for an appealing package of prospects.