The Marlins have sent the righty to Los Angeles after weeks of speculation about his destination.

Share All sharing options for: Dodgers trade for Ricky Nolasco

The Los Angeles Dodgers have acquired starter Ricky Nolasco from the Miami Marlins in exchange for pitchers Steven Ames, Josh Wall, and Angel Sanchez , a source has confirmed to MLBDailyDish's Chris Cotillo. The Dodgers also announced that they will also acquire $197,000 in international bonus slot money. 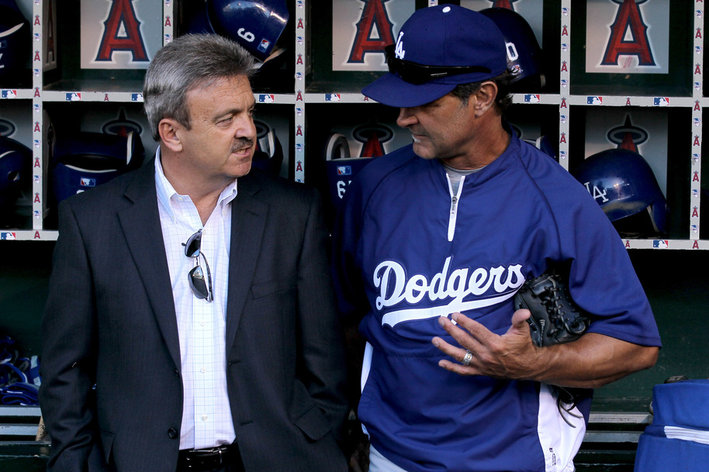 A few of us at SB Nation MLB headquarters try to answer.

Nolasco has been pursued by the Giants, Padres, Rockies, and Rangers in recent days, but the Dodgers have long been the frontrunner due to their willingness to pick up a substantial part of the righty's salary for the remainder of the year. According to MLB.com's Joe Frisaro, the Dodgers will pay the entirety of the approximately $5.5 million owed to Nolasco, who is a free agent after the season.

Nolasco, 30, is 5-8 with a 3.85 ERA on the season, and will immediately provide an upgrade for the injury-hampered Dodgers' rotation. He has been the subject of constant trade rumors for weeks, and will likely set off a domino effect of trades involving Bud Norris, Matt Garza, and possibly Yovani Gallardo. After Nolasco demanded a trade in the offseason, the Marlins finally decided to comply and spent the last few weeks sorting through offers and trying to make a trade that would help their rebuilding process.

Ames, 25, will head to Triple-A New Orleans, according to his agent, Joshua Kusnick. The former 17th round pick was 2-2 with a a 3.67 ERA in 30 appearances for Triple-A Albuquerque this season, and should be on track to make his major league debut later this season.

"What an amazing opportunity Steven has coming to the Marlins. He's good friends with [Nathan] Eovaldi and should be up with the big club sometime before September. He's a blue collar pitcher with great command and velocity. He has run it up to 95 mph and is a ground ball machine. He has closer makeup and I know it has to be hard for the Dodgers to part with an arm that is as electric as his."

Sanchez, who MLB.com ranked as the Dodgers' eighth best prospect prior to the season, is regarded as the jewel of the package and will likely head to Hi-A Jupiter. At 23, he is 2-7 with a 4.67 ERA in 16 appearances with Single-A Great Lakes and High-A Rancho Cucamonga on the season. Although he is known as a very talented young pitcher, his minor league performance (4.88 ERA in 63 career games) suggests that there is a great amount of development ahead of him. In the Marlins system, he hopes to be able to develop into the type of pitcher that will make the Nolasco deal worthwhile.

By swinging the second major deal of July, both the Dodgers and Marlins addressed team needs and did not have to give up a huge amount to do so. Los Angeles has been looking for pitching help for weeks, and received a proven major league starter without giving up a high-level prospect. The Marlins were able to move an asset and restock the farm system with two arms who could help the major league team in the very near future and a high-ceiling young talent in Sanchez. Miami also received salary relief due to the Dodgers' willingness to pay Nolasco's contract, and the Dodgers were able to pick up some international signing money in the process.

Ken Rosenthal of FOXSports.com first reported the serious talks between the teams. Joe Frisaro of MLB.com was the first to confirm that Ames was part of the deal, which was followed up with Chris Cotillo of MLBDailyDish's report that Sanchez and Wall were involved. Frisaro was first on the agreement between the teams, and the teams announced the trade to make it official.