Cuban slugger Jose Dariel Abreu is headed to America and the MLB free agent market. Who is he, who wants him and what will he cost?

Earlier this week, one of Cuba's top baseball players defected from his homeland to come to America and play in the major leagues. Slugging first baseman Jose Dariel Abreu left Cuba on Monday and after he has established residency in another country, he will eligible to sign as an International free agent, exempt from the signing bonus limitations placed on international amateur signees, according to Ben Badler of Baseball America. At 26-years-old Abreu is positioned to be one of the top first base options on the market this off-season once his immigration status is resolved.

Who is Jose Dariel Abreu?

It is hard to avoid comparing Abreu to two of his most famous countrymen at this point. Like Dodgers phenom Yasiel Puig and Athletics star and Home Run Derby champion Yoenis Cespedes, Abreu is a powerful right-handed hitter with an imposing frame. Badler lists him at 6'3 and 250 pounds, making him essentially the same size as Puig.

Abreu is more athletically limited than those two players according to Badler and he is limited to playing first base or DH as a result, but his bat is driving the conversations around him and it could be better than both of his fellow Cubans. Badler reports-

It is hard to contextualize those numbers given the lack of information on the Cuban League, its level of competition and run environment, but that sample is at least consistent with the level of production Abreu has provided year in and year out in Cuba. Abreu's WBC performance was notable as well; he went 9-25 with three home runs and nine runs batted in six games in the tournament. Here he takes a 90 mph fastball to the deepest part of center against the Netherlands.

While Abreu offers the potential for offensive upside on par with Cespedes or Puig, his defensive limitations will limit his market some. Badler also reports that some scouts are less-than-enthusiastic about his bat speed and also expressed concerns over his swing mechanics. However, given his obvious plus-power, the question is not will he get a deal, but just how much and from who.

The Red Sox are obvious candidates to sign the Cuban star. Current Sox first baseman Mike Napoli will be a free agent at age 32 after this season and the team has already expressed concerns over his long term health. Fenway Park is a natural fit for a power-hitting righty and the Red Sox certainly can afford to be the top bidder. GM Ben Cherington is already having to dodge questions about Abreu and until he signs, Boston is likely to keep coming up in the rumors around him.

Roch Kubatko of MASN reports that the Orioles are also interested in Abreu and his "monster power" after following him for some time. Baltimore would be a great fit for his bat thanks to Camden Yards tendency to favor right-handed home runs and with Orioles DHs producing just .5 WAR this season, he would certainly fill a need there. They are not nearly as wealthy as the Red Sox, however, and Kubatko warns that they aren't known for getting involved in bidding wars for players on the international market.

The Rangers are another logical suitor. They missed out on Napoli over the off-season this year, signed veteran Lance Berkman as a stop gap solution at DH and gave the first base job to Mitch Moreland. Moreland has been a slightly above-average hitter this year (102 wRC+) but he is hardly the slugger many expect Abreu to be. Texas was aggressive on the international amateur market prior to the new CBA and its bonus restrictions so they might jump at the chance to for a potential upgrade that is merely a matter of spending money. 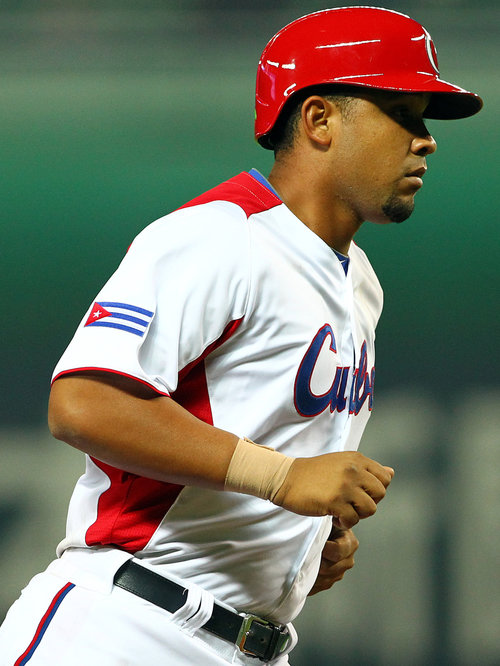 There's not a lot to say, but the Red Sox are at least acknowledging Abreu is an option.

Those three teams make a great deal of sense and there is a strong chance he lands with one of them but a number of less-obvious suitors could sneak up on people.

The Mets are a big market team, they should have the ability to spend and they have some need at first base, but it is hard gauge what they are actually willing to invest right now. Their first base production has been terrible this season overall, but 28-year-old rookie Josh Satin is currently hitting an impressive .303/.429/.422 over 133 plate appearances. Incumbent Ike Davis was bad enough in the first half to find himself back in Triple-A, but since the All-Star break he is hitting .319/.495/.507. The Mets window to win may be ready to open up again, however and if they see that as the case, they should have the ability to be top bidders on almost anyone. Satin and Davis are cheap and they have potential, but they have major question marks around them as well. Abreu isn't a sure thing either, but if winning now becomes the priority, he may be the Mets best option.

The Pirates are among the smallest of the small market teams, but they are also on the verge of making the playoffs for the first time in twenty years and they have done it with very little help from first basemen Garrett Jones and Gaby Sanchez. Like the Athletics- who surprised most of baseball by landing Cespedes- the Pirates could look at Abreu as a cost-effective win-now option that is too good to pass up.

What is he going to cost?

Given that both Yoenis Cespedes' four year/$36 million deal and Yaisel Puig's seven year/$42 million look like absolute steals at this point, it is probably safe to bet that Abreu will command more. How much more is hard to say. Puig is four years younger and processes better speed and more defensive impact, but he was also much more of an unknown at the time he signed, so the risk around him helped lower his cost. Cespedes is more comparable in terms of age and his experience on the international stage, but also he boasts better speed and a more valuable defensive profile. Many of the big-market clubs like the Dodgers, Yankees and Angels are already set at first base and DH thanks to previously signed long-term deals so even if the Cespedes and Puig deals point to strong returns on top Cuban hitters, the limited number of buyers for his position may keep the price in a similar range.

Perhaps the more relevant issue will be the lack of other first base options available to the buyers. Mike Napoli had a difficult time landing a multi-year deal last season, originally settling for a three year/$36 million deal with the Red Sox before a medical issue cut that back to one year/$13M. Napoli will once again be the top option at first among free agents this off-season and that should help Abreu. Napoli also is likely to receive a qualifying from Boston as well. Last off-season, we saw just how much the cost of a draft pick dissuaded teams from signing players. Faced with the prospect of signing an again Napoli to a two or three year deal with an average value of over $10M and losing a draft pick, many teams will prefer a longer deal with the younger Abreu even given the uncertainty around him. For that reasons, he can probably command five or even six years and a yearly value on par with Cespedes That would mean a contract between five and six year and between $45-$60M. That no small sum considering the risk, but as Puig and Cespedes have shown, there is potential for tremendous value in such a deal.