Last off-season, the draft pick compensation system introduced in the new CBA had a dramatic effect on free agent contracts. Who will receive qualifying offers this off-season and which players will be most affected by them?

One of the biggest lessons of the last off-season was the important role that the qualifying offer system now plays in free agency. Several attractive free agents saw the market for their services shrink dramatically thanks to the compensation pick attached to the qualifying offer and ended up with lesser deals they originally hoped for.

For very best players among available free agents, there is little to worry about. Any team looking to ink a player to a nine figure deal isn't going to be seriously dissuaded by the loss of a draft pick. Players with little hope for a substantial multi-year deal are also relatively unaffected.

Teams must consider a player to be worth at least one year at approximately $14 million (up from $13.3 million last off-season) to even consider making the offer and only a handful of players heading into free agency offer that level of production. Additionally, some veteran players offer enough production to warrant the offer, but thanks to their age or relationship with their team, they are unlikely to land a deal that differs greatly from the qualifying offer. Players like Zack Greinke, Josh Hamilton and David Ortiz all received offers, but the offer had little impact on their final deals.

The players affected are those who are unquestionably valuable enough for team to make the offer,still young and productive enough to have a good chance of landing a multi-year contract of close to the same annual value, but far enough away from the top of the market to give teams a reason to worry about the added cost of a draft pick. Last season, starting pitcher Kyle Lohse, reliever Rafael Soriano, center fielder Michael Bourn and first baseman Adam LaRoche all fit that description and were all hit hard by the effects of the qualifying offer. LaRoche had to settle for a two-year deal worth $24 million with his previous club, the Nationals, in the absence of any three or four-year offers. Soriano took a similar deal (2 years/$28 million) with new team. Both Bourn and Lohse were able to find longer multi-year contracts, but the values were heavily depressed by the added cost of a draft pick.

This upcoming off-season has a number of players who are likely to receive qualifying offers and once again, some will be relatively unaffected and some will find a much smaller market waiting for them as a result.

The Obvious and unaffected-

These three are the cream of the 2014 free agent crop and no draft pick compensation issues are going to hold back their suitors. Cano is likely to command the highest price tag and his deal could potentially top $200 million, but McCann might be the one to inspire the most competitive bidding wars. At 29-years-old, McCann offers years of plus-offensive production at a position where players typically hit between 5-10 percent below league average. Ellsbury might have landed in qualifying offer no-man's land after a disappointing and injury ridden 2012, but he has already topped four wins above replacement (fWAR) this season and his combination of speed, defense, contact and power is extremely rare.

Should receive an offer and be just fine-

These players are not as elite as the previous group but the lack of options on the market should make them attractive to a large group of teams, making the compensation issue a secondary concern. Pence and Choo are the next best alternatives for teams priced out of the Ellsbury bidding. Both are 30-years old and productive enough on both sides of the ball to justify three-to-five year deals. Pence could slip into the next category if teams are down on him, but he still among the better free agents available. Kuroda is 38 and still pitching extremely well, but the market for his services is already limited to a small selection of teams ready to contend now and willing to take on the risk of a high priced veteran arm. The smart money is still on him staying in New York, but even if he looks elsewhere for a better deal, the loss of a draft pick won't matter much to any team looking to sign him.

These are the players most likely to have their value significantly impacted by a qualifying offer. All of these players are still young enough and productive enough to justify contracts of three or more years, but all of them also have question marks about their long term productivity.

Mike Napoli originally reached a deal for three years, $36 million with the Red Sox last off-season, but the deal got scaled back to one-year, $5 million with incentives up to $13M after medical issues arose. Napoli has produced about as well as the Red Sox hoped, hitting .244/.335/.435 and handling the defense at his new full-time position capably. Unless they plan to go all in on Jose Abreu this off-season, the Red Sox have few alternatives to Napoli so the risk of a slight overpay for one year is something they can easily justify. Other teams are unlikely to value Napoli so highly and adding the cost of a draft pick to his price tag is only going to make them more hesitant about committing to him. The one thing he does have going for him is a lack of impact talent at first base in this crop of free agents. 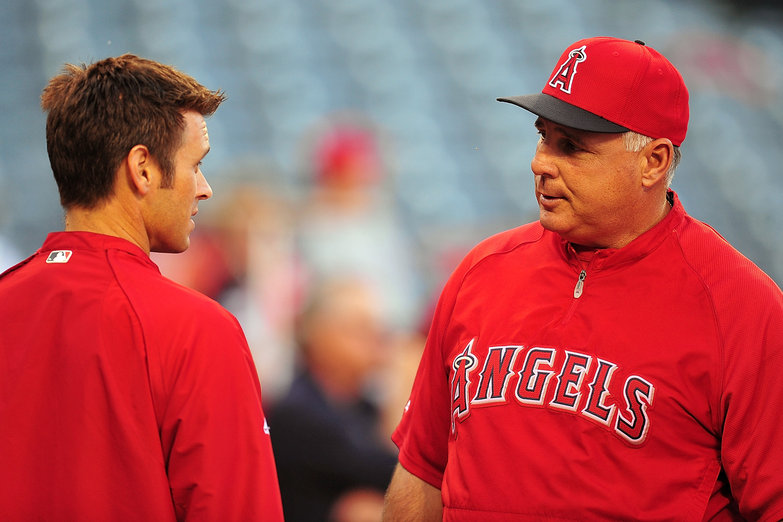 Dipoto is the more likely candidate to be sent packing from the Halos.

Curtis Granderson has missed most of the 2013 season, but he has played well since returning, hitting .278/.393/.456 over 107 plate appearances. He is also going to be 33 next season and his center field defense has dropped off a cliff by most measures. There is no shortage of teams would love to add a center fielder with 40+ home run power, but adding a player better suited to left with a strikeout rate rapidly approaching 30 percent is a different story. Teams also may not believe in his ability to hit for 40+ home run power outside Yankee Stadium, which boosts lefty power by an incredible 18 percent. Given his age and these substantial risk, Granderson may been vulnerable to the negative effects of the qualifying offer, especially if the Yankees decide to focus on landing Ellsbury, Choo or Pence instead of keeping him.

Ervin Santana is comparable to last-season's qualifying offer victim Kyle Lohse in a number of ways. Like Lohse, he combines averagish strikeout ability with plus control and he will be coming off a very strong walk-year. He has a major advantage in that he is just 30, whereas Lohse was 33 in his walk-year, but he also has the specter of an ugly 2012 season where he posted a 5.16 ERA and a 5.68 FIP. hanging over him. His age should make a long-term deal much easier to find and there is a lack of pitching on market to help him as well. However, he is far from being an ace and with one of the stronger draft classes coming up in June, teams could balk at paying a premium for a streaky, mid-rotation guy who also costs them a draft pick.

Tim Lincecum has one of the best track records of any pitcher on the market and the Giants are almost certain to make a qualifying offer to keep him around. He has won two Cy Young Awards and he is just two seasons removed from a 200 strikeout season and a sub-three ERA. However, those two seasons contain a marked drop in velocity, 5.18 and 4.53 ERA seasons, a playoff assignment to the bullpen, talk of a move to the closer's role and just a few brief moments that remind us of the pitcher he once was. Lincecum's results this season have been far worse than stats like FIP and xFIP suggest they should be, so there is hope that he can return to effectiveness at least. However, given a qualifying offer, Lincecum may do well to just take the short-term deal. He may land a long term job elsewhere, but the Giants understand him and his unusual delivery better than anyone and getting back on track next season would create better opportunities than the ones he may have to settle for right now.

On the qualifying offer bubble-

These players are borderline candidates for offers and it is tough to tell which way their teams will go.

Morneau hasn't been worth anywhere near $14 million in any of the past three seasons as injuries have derailed his career, but he is been one of the hotter bats in the game this month, hitting .293./330/.598 with seven home runs in 97 August plate appearances. Continued success and a limited first base market could make him a more viable option for many teams than he appears now. Of course, if he is traded before the end of August, the issue will be null and void.

Drew signed a one-year/$10 million deal with Boston this season and he has been healthy enough and productive enough to warrant both a qualifying offer and a multi-year deal. However, $14 million would be an overpay for his services and unlike with Napoli, the Red Sox are well stock with less-costly alternatives, including top prospect Xander Bogaerts. If he is extended the offer, it will likely limit his options to some degree as well, so he could take it, trusting in his ability to repeat his 2013 performance. The Red Sox love to get draft picks back when they can, but the risk that Drew takes the offer might scare them away.

Johnson would have been a lock to earn a qualifying offer before the season started, but arm injuries, declining velocity and an unsightly 6.20 ERA over 81 1/3 innings now make it something of a long shot. Given his struggles, he would be foolish to turn it down if it offered, since a bounce back year in 2014 would up his price tag on a multi-year deal greatly.

Perhaps the most difficult thing to predict right now is how players and agents will react to the effects the qualifying offer had on players like Bourn, Lohse, Soriano and LaRoche last season. It is quite possible that a greater number of players will simply accept the offer, limiting a weak free agent class even more. The rise from a rate of $13.3 million to $14 million represents about a five percent increase in the rate and although that matches the typical rate of inflation for free agent salaries, it is a high price tag for many of the players listed above. Teams have shown a willingness to overpay in the short-term thus far, but the current CBA has just one off-season worth of data behind it and some overreaction on both sides could be major factor this winter.