MLB waiver trades: Will a dreadful deadline lead to an eventful August?

This year's trade deadline passed with a whimper, leading many to hope for an active waiver-trade wire this month. Is expecting a repeat of last year's exciting August wishful thinking?

Share All sharing options for: MLB waiver trades: Will a dreadful deadline lead to an eventful August?

As the baseball Twitterverse seems wont to remind us every few minutes, almost every MLB player will be placed on waivers in the month of August:

Almost every major league player goes on waivers in August.

These incessant reminders are meant to imply to you/me/us that news leaking of a team placing a big-name player on the waiver wire does not necessarily mean that player is available. There's always a chance All-Star Player X will be dealt to your favorite team, but the odds aren't very good now that the July 31 deadline has come and gone. More likely is that your favorite team will add Bench Player Y or Minor Leaguer Z, if anyone at all.

You know all this. This is not your first time watching a baseball season unfold. But with the second Wild Card keeping teams in contention longer than in the past -- or at least providing the illusion of contention -- perhaps the trade market dynamic has changed. Perhaps a player clearing waivers in August is a little bit more meaningful now than it was two years ago.

Last year was the first season with the new playoff rules, so let's briefly look back at August 2012 for clues as to whether things have changed...

Unlike this year, several huge names moved in the final weeks of July 2012. Zack Greinke, Hanley Ramirez, Shane Victorino, Hunter Pence, and Ryan Dempster were all in new uniforms by the end of the month, seemingly leaving the cupboard bare for meaningful August deals.

And so it was for a time. A couple of deadline stragglers -- Joe Blanton and Kurt Suzuki -- were moved in the first few days of the month, but other than that and the Dodgers' hilarious claim of Cliff Lee, nothing all that exciting came over the wire.

The Dodgers -- under new ownership and looking to make a big splash -- acquired Josh Beckett, Carl Crawford, Adrian Gonzalez and Nick Punto from the cellar-dwelling Red Sox in exchange for James Loney, Rubby De La Rosa, Ivan De Jesus, Jerry Sands, and Allen Webster. Moving more than $230 million in contract commitments from Boston to Los Angeles, the deal was easily the biggest August trade of the last decade, and perhaps of all time.

For the Red Sox, the trade was an obvious (and very successful) bid to hit the reset button by freeing themselves of most of their long-term contracts. But was it just a one-time thing? Or was it indicative of teams becoming more open to big post-deadline moves now that the rules have been altered slightly?

The answer seems to lean a little towards the former, but also may be a "no" to both questions. That makes no sense, so allow me to distract you with this pretty chart: 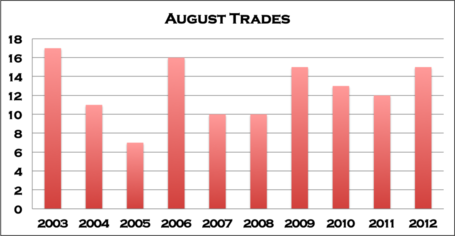 Over the last decade, there have been an average of roughly 13 trades* in August per season. While the 2012 season boasted the biggest single deal over that timeframe, it tied for third in terms of number of trades completed.

And while A-Gon, Crawford, Beckett, etc. are most definitely biggest single collection of quality players moved during the calendar's lone holiday-less month, they aren't the only players of note to change hands in an August deal. In fact, at least one household name seems to get moved every year:

So, to (hopefully) clarify my earlier point... Boston's selling off of loads of contracts was most likely a singular event, but it's not the first time a team has unloaded a big name beyond the deadline, and it doesn't seem to point to a larger trend of teams making more August trades.

There also doesn't appear to be any relationship whatsoever between the number of deadline deals and the number of trades that follow in August, so while there are plenty of waiver-trade candidates as a result of this year's disappointing deadline, it may not lead to much. There's a chance, then, that the Phillies will deal Michael Young and/or Carlos Ruiz sometime this month -- or that the White Sox will move Alex Rios -- but there's nothing to indicate that their moving is a foregone conclusion.