The Rangers found their replacement for the suspended-Nelson Cruz when they acquired Alex Rios from the Chicago Cubs.

It's hard for a team to find a replacement for a 30 home run, 90 RBI a year bat post-non-waiver trade deadline. According to all accounts, the Rangers found the best option possible with the 32 year old outfielder. 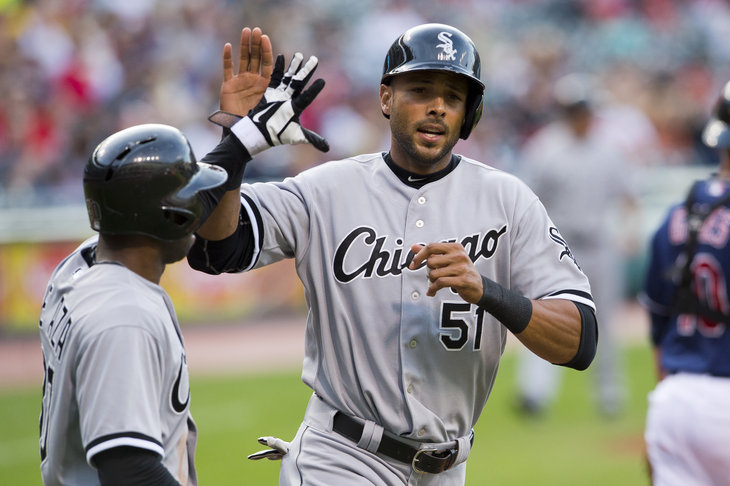 The Rangers finally get the bat they have been looking for to replace Nelson Cruz.

Marc Normandin from SBNation writes that Rios is a proven commodity for the Rangers:

Rios isn't exactly a slugger, but no one the Rangers had in line to replace Cruz fits that bill, either. Rios is a known quantity who has been exactly average at the plate in 2013 -- albeit below the more exacting requirements of right field -- who is also capable of contributing with his glove.

He's under contract not just for this season but also 2014, and has a club option for 2015 attached as well -- if the Rangers decide they want Rios to be not just their short-term replacement for Cruz, but the long-term answer as well, then some of their Christmas shopping has already been completed.

He's not that expensive at $13 million in 2014 and $14 million for 2015, both of which will likely be below the qualifying offer threshold for free agent compensation contracts.

Rangers manager Ron Washington is excited for Rios to join the team:

"With the situation that we were in, it wasn't too much of a surprise," he said. "They were trying to get rid of salary or whatever they wanted to do. I think many people expected this to happen. You know what, it's all good.

"He in my opnion has been outstanding for us both on and off the field during his stay in Chicago, a pure class act. At the same time, this opens up an opportunity for playing time for Avisail Garcia."

Adam J. Morris of Lone Star Ball looks at how the move will affect the Rangers roster and whether or not it'll be equitable value:

With Cruz suspended, Rios will essentially replace some combination of Engel Beltre, Joey Butler and Jurickson Profar as an OF/DH, and I think its questionable as to whether those players would have given the Rangers replacement level production in Cruz's absence.  Adding Rios probably means an extra half-win to a win over the rest of the year.

It would seem the biggest impact of this deal would come in the playoffs.  If Lance Berkman comes back healthy and productive, the Rangers could slot Berkman at DH in the playoffs, and have a Rios/Leonys/Cruz starting outfield.  If Berkman is done, as many fear, then Cruz can DH, with Murphy and Gentry platooning in the other outfield spot next to Leonys and Rios.

And our friends at LSB come out in favor of the trade, giving it an "A" (on an A+ to F scale).