Two division leaders will head into the final weeks of the season without their star center fielders, but the impact of the injuries to Matt Kemp and Jacoby Ellsbury will be very different for the two clubs.

On Friday, news broke that the Dodgers were shutting down Matt Kemp, who had been rehabbing from an ankle injury at High-A Rancho Cucuamonga. The next day, MLB Daily Dish learned that Red Sox center fielder Jacoby Ellsbury, who had sat out the past few games with a foot injury, would be out indefinitely as a result of that injury. Both teams are currently leading their divisions comfortably and are virtual locks to hold their leads over the last three weeks of the season, but these injuries could have serious implications for the two clubs in October.

The two star center fielders have a great deal in common. Both have 2nd place MVP finishes in 2011 on their resumes and even before it was revealed that Ryan Braun was using steroids, there were compelling arguments that Ellsbury and Kemp both deserved the award that season. Kemp has boasted significantly more power in his career, but his .293/.350/.494 is incredibly close to Ellsbury's .297/.350/.438 line in average and identical in OBP. Ellsbury has played in the more hitter-friendly environment of Fenway, however, so context-adjusted numbers give Kemp an even bigger edge on offense. The Dodger center fielder has been a full 26 percent better than league average by WRC+, whereas Ellsbury has been just 9 percent better. Ellsbury is a vastly superior defender by every advanced measure of defense, however, and he also adds more value on the bases, getting caught stealing eight fewer times than Kemp in more seventy extra attempts. All told, the two players have been very close in value, with Ellsbury producing 23.4 fWAR in his career and Kemp putting up 20.2.

Even though the two players have had very similar values over their careers, this season, the impact on their teams will be very different in the final weeks and in the playoffs.

Kemp has played just 62 of the 141 games the Dodgers have played so far and he has been just a shadow of his former self when he has been on the field. He is hitting .263/.319/.382 this year with just five home runs in 281 plate appearances. He hasn't played since suffering an ankle injury on July 21 and he missed almost another month of baseball earlier in the season with a hamstring injury. The two lower body injuries are not likely to have serious long-term implications, but his off-season shoulder surgery and lack of production at the plate this year combine to raise more serious concerns. While the ankle injury is the official reason for the shutdown, an 0-18 slump in High-A is extremely discouraging and may point to a larger issue at work here. 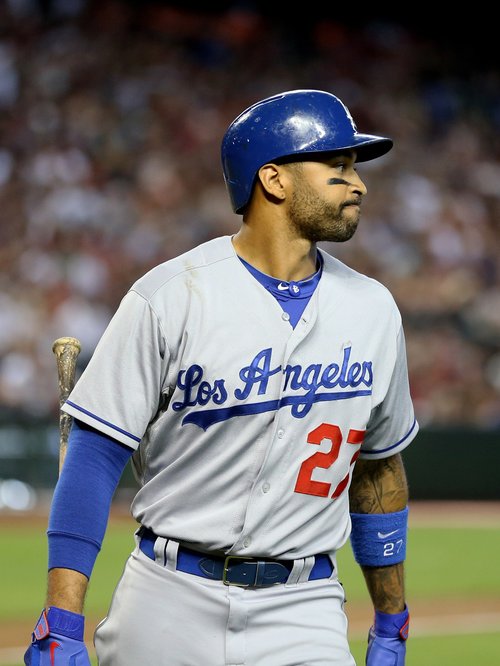 The Los Angeles Dodgers have shut down Matt Kemp for the rest of the season.

In the short term, however, the Dodgers will probably not miss a beat. Los Angeles has been without Kemp for most of the season at this point and they have still managed to put together one of the best outfields in the game. Dodgers outfielders have combined for a wRC+ of 116, tying them for the third best offensive outfield in the National League. Andre Ethier has moved from right field to center in Kemp's absence and he is having an excellent year, hitting .275/.363/.422 and playing better defense than Kemp ever has according to Ultimate Zone Rating. Rookie sensation Yasiel Puig replaced Ethier in right and he has been a beast since getting called up in June, hitting .347/.407/.564 and playing excellent defense highlighted by an imposing arm that should make base runners think twice when he has the ball.

The loss of Kemp will really just be felt in the team's depth. If Ethier, Puig and left fielder Carl Crawford all remain healthy, the Dodgers might be better off without Kemp- the injury sparing them the need to make tough choices about a star player in the spotlight of the playoffs. However, Puig has been dealing with knee issues lately and Carl Crawford has spent time on the DL this season with a hamstring injury. Without Kemp, Jerry Hairston and Skip Schumaker will be the first lines of defense if anyone goes down. Hairston is primarily a platoon player suited to matching up against lefties, but not a viable everyday option. Schumaker has played some center and has hit a respectable .269/.342/.341 but he would also be stretch as an everyday player. September call-up Scott Van Slyke gives them another corner option now, but he is likely to be ineligible for the post-season roster. If anything were to happen to Ethier, Puig would likely slide to center and the overall outfield production would certain suffer. Beyond that, missing Kemp is probably not going to matter much in L.A.

For Boston, the loss of Ellsbury is much tougher to handle. Ellsbury has been the team's second most valuable player by fWAR and he has hit.299/.355/.424 while stealing 52 bases in the lead off spot. Ellsbury is equally important to the defensive side of the game, saving 10.8 runs above average in center according to UZR. Overall, the Red Sox outfield production has been the best in baseball by fWAR and the bulk of that value is coming from Ellsbury and right fielder Shane Victorino. Unlike Kemp, Ellsbury has played in almost every game for Boston this season and the team will have to make serious adjustments to compensate for this loss.

If there is one saving grace for the Red Sox, it is that they have a natural center fielder playing in right in Victorino. He has already moved to center in Ellsbury's absence and he is clearly still capable of plus glove work there. He is also surging at the plate, hitting .309/.397/.564 with seven home runs over the last month. He is even a natural replacement in the lead off slot, with 20 stolen bases in 23 attempts this season. He was signed partly to give Boston insurance if Ellsbury should leave this off-season and he has proved as good a back-up plan as any team could hope for.

Jacoby Ellsbury out indefinitely due to right foot injury 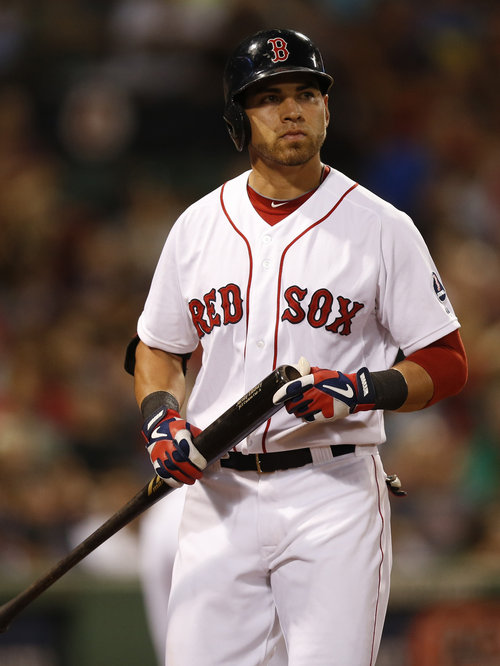 The Red Sox star center-fielder is out indefinitely with a right foot injury./span>

The fall off will come from replacing Victorino in right. Daniel Nava should get the most time there and with a .300/.392/.450 line this season, he has made his way into the line up most of the season anyway. On defense, he is a tremendous downgrade, however. He has played some right this year when Victorino has been hurt as well as playing left and first and he has cost the Red Sox 10 runs according UZR, with right field accounting for six of those. The injury to Ellsbury will also mean more time for Mike Carp and Jonny Gomes, two players who can hit but are notoriously cringe-worthy on defense. Prior to October, the Red Sox can supplement their defense with Jackie Bradley Jr. who many scouts see as an elite talent on defense in center. Bradley hasn't hit much at the big league level thus far, however, and the Red Sox won't have unlimited space on their post-season rosters.

The Red Sox and Dodgers are at opposite extremes here. Losing Kemp doesn't do much to hurt the Dodgers production but it does leave them lacking in outfield depth. In the post-season, depth can matter a great deal, but it will take another injury to make it a factor. The Red Sox have an impressive amount of depth in the outfield, but even that can't make up for such a major loss. Multiple players will be employed to attempt to patch the hole Ellsbury leaves if he doesn't take the field again, but missing someone like Ellsbury, who is capable of changing a game with his bat, his speed and his defense, is nearly impossible.