What would the costs be if Brian Cashman did in fact need to move Brett Gardner for pitching? Would it be enough?

As painful as it is to write about the Yankees twice in a week, today Peter Gammons confirmed widespread assumptions about Brett Gardner's fate this offseason:

Since the Yankees signed Jacoby Ellsbury and Carlos Beltran, at least a half-dozen teams—from the Phillies to the Tigers—have taken a run at Brett Gardner, knowing he’s a free agent at the end of next season. But Brian Cashman won’t move him until and unless he has to for starting pitching.

The fact that Brett Gardner is the second-most valuable returning Yankee--having been worth 3.2 fWAR in 2013 (second only to Hiroki Kuroda at 3.8 fWAR)--should absolutely be of concern to Brian Cashman when looking at their 2014 squad. As I detailed in my piece on Tanaka not being enough to vault the Yankees into the playoffs earlier this week, the Yankees don't exactly have a surplus of productive talent.

That said the Yankees do have a lot of outfielders. Well, sort of. The Yankees have Gardner, Jacoby Ellsbury, Alfonso Soriano, Carlos Beltran, Ichiro Suzuki, and Vernon Wells. Ellsbury, Gardner, and Ichiro are all still above average defensive players, and Soriano can play a passable left field. Vernon Wells, however, has not put up a season with a positive defensive component for fWAR since 2008.

As for Beltran, he was the worst defensive player in baseball last year, with the largest negative defensive component for fWAR of any player. His -18.7 UZR/150 was like Friday the 13th Part VIII: Jason Takes Manhattan: scary, but not "scary good," scary in that you can't help but wonder how it ever happened in the first place. To add to the horror show of Beltran in the outfield, his arm is now a liability as well, as 2013 marked the first time that his arm rated out as having cost his team runs. 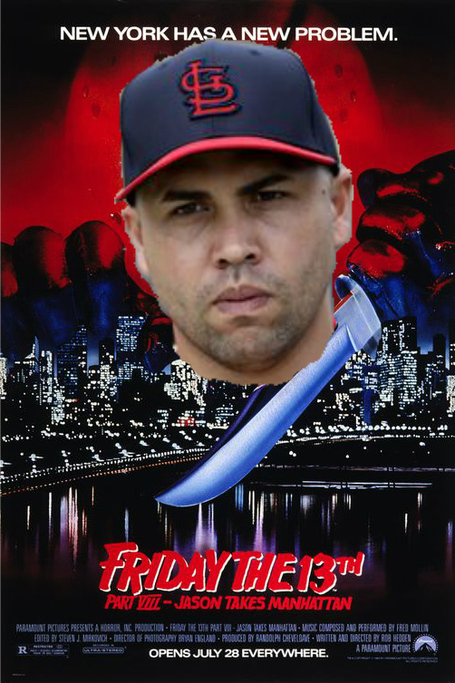 Since they're already over the luxury tax threshold, Brian Cashman and the Yankees could easily afford to cut Vernon Wells loose, eating the $2.4MM that they owe him in 2014. That would rightfully shift Beltran to DH, leaving Soriano and Ichiro as their pricey fourth and fifth outfielders ($5.0MM and $6.5MM, respectively). Neither Soriano nor Ichiro would be likely to fetch much on the trade market, but their price tags aren't huge impediments to shipping them off.

Of course, all that is assuming the health of their outfielders (and that the Yankees are smart enough to keep Beltran off the field as much as possible). Ellsbury's injury history has been well documented--roughly 260 games missed to injury in the past four seasons, or two of every five games. Gardner is a year removed from a 16-game season. Wells played only 77 games in 2012. In fact, the only ones who have been mostly healthy for the past three seasons are Ichiro, Beltran, and Soriano. If there was a team that could afford to have $11.5MM of their payroll devoted to their fourth and fifth outfielders, it is probably the Yankees.

Unfortunately for the Yankees, they may not have that luxury. Gardner is one of their few commodities that has value on the trade market, and that value is limited by the fact that there's only one year of club control left. Since arbitration is generally driven by offensive numbers, Gardner is only expected to earn somewhere in the neighborhood of $4.0MM, so the opportunity for a team to get significant surplus value in $/WAR is high. 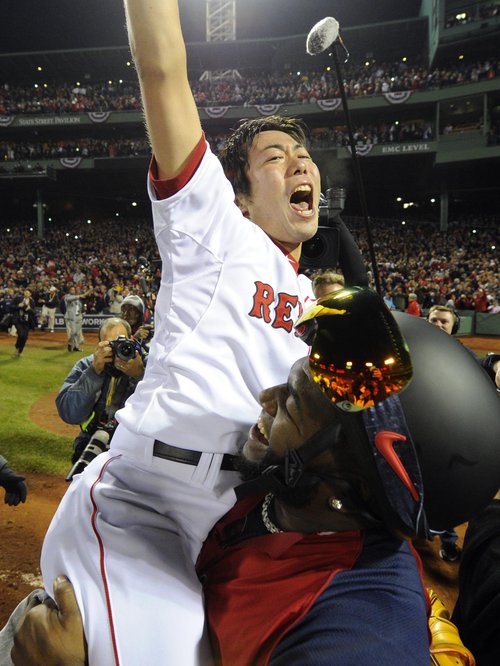 2013 is now in the books and as Frank Sinatra liked to sing, it was a pretty good year.

With so many teams being in the market for starting pitching, though, it is hard to imagine Gardner alone being enough to get an impact arm. With the Yankees not having produced an everyday player since the 2005 draft (h/t Josh Norris)*, they don't have much of value in the farm system past Gary Sanchez to package with Gardner to yield the coveted arm they might want.

*I've long said their player development was bad, but this is ineptitude on display.

As postulated in the aforementioned Tanaka piece, the Yankees could well need not just Tanaka but also Ervin Santana, Ubaldo Jimenez, or Matt Garza to get them anywhere near the 90-win threshold to be able to realistically think about a Wild Card spot. Their true-talent level was really much more in the neighborhood of a .500 team (or worse) and they lost more than 13 WAR of production from last year via free agency and retirement and haven't even completely replaced that production in their off-season moves thus far.

While it is novel to think the Brett Gardner might be able to fetch them the starter they may need should Tanaka (and everyone else) sign elsewhere, it is hard to imagine a scenario in which Gardner nets a good enough starter to both offset the production lost in Gardner's absence and to vault them into the playoff picture. After all, what pitchers who are commonly thought to be available via trade would be impactful enough for the Yankees to want? Which teams would be willing to trade that potential impact arm for a package centered around one year of Gardner and the Yankees misshapen prospects?

Honestly, if it gets to the point where the Yankees are having to address their needs in the rotation with a Brett Gardner trade, Yankees fans should probably brace themselves for a letdown.