Ervin Santana and Ubaldo Jimenez could benefit from post-Garza absurdities

Share All sharing options for: Ervin Santana and Ubaldo Jimenez could benefit from post-Garza absurdities

Life itself is absurd.

We are, after all, our own momentary children, perpetually authoring a germinal spiral of pregnant histories.

But this post-Matt Garza shit could get really weird.

Despite being the most reliable of a pretty precarious trio, Garza was expected to earn the least at the top of the Tanaka windfall queue behind Ervin Santana and Ubaldo Jimenez. Some would argue that A.J. Burnett is up there too, but he's said he's only pitching for Pittsburgh if he returns, so he doesn't really count. Bronson Arroyo is another guy that could be considered a part of the upper tier, but he'll be 37 next month. So, teams might be a little hesitant to give old Saturn Nuts a four-year deal.

That leaves us with these guys.

If you're not familiar with fielding-independent pitching, you should definitely watch Bradley Woodrum's "Double-Awesome Film" about it. But if you don't have time, just imagine the graph above is charting ERA -- because in this case, those two graphs look pretty similar. Garza hovers around the league average with that one widow's peak in 2011, Ubaldo has been solid since 2008 except for 2012, and Santana's data points look like something shaved into the side of Antonio Garay's head.

Of the three, Garza could make an argument for being the most appealing before draft compensation is even considered.

The Yankees keep scooping up the best the free agent market has to offer, but $345 million just doesn't buy what it used to.

What will you remember: The player or the contract?

The Rangers couldn't extend the qualifying offer to Garza since they traded for him during the season. If they had the option, Garza might be in the same situation as Jimenez and Santana -- a situation that seems to be much less desirable now that Garza has signed such a skimpy deal. After a brief period of speculation, the team announced that they had agreed to a four-year deal with Garza that guarantees him $50 million. It works out to $12.5 million a year, and includes $4 million in incentives and a vesting option for $13 million in 2018.

The draft compensation attached to Santana and Jimenez appears to be causing their markets to shrivel. However, up to eight teams are interested in Santana to some degree at the moment, according to Chris Cotillo -- and Ubaldo probably isn't far behind.

A few teams, like Toronto and Seattle, wouldn't have to give up their protected first rounders to sign a qualified free agent, but they would have forfeit the draft money slotted into those picks. The league issues slot recommendations that, when combined, serve as a sort luxury tax-esque cap on draft spending. If a team wants to spend extra money in the draft, they are more than welcome to -- but are forced to pay a lofty tax on every dollar over that league-"suggested" threshold. For the 2013 draft, slotting started at about $7 million, and tapered off quickly from there, reaching the meager six-figure range around the mid-50s.

Surrendering the pick isn't the only punishment. A team's draft strategy would be significantly altered by losing that big chunk at the top. Some experts have suggested that qualified free agents like Santana and Jimenez will be forced to return to their old teams, because of the money/picks attached to them, but it's just as illogical for these players' former teams to forfeit a chunk of their draft budget as it is for any other. The Royals and Indians are expecting a pick in the 30s (about $2 million) in compensation for their players signing elsewhere. That amount could nearly double their draft budget for the first few rounds -- where the best players are available. 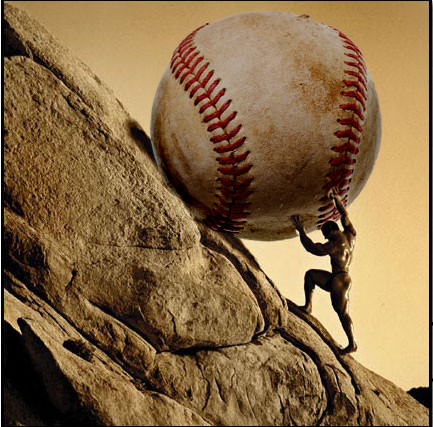 One must imagine Ervin and Ubaldo happy.

But, agents have shown some pretty impressive patience in the past. If these guys hang around long enough, the market will evolve from where it is now. In fact, the market has been so absurd this winter, a man who has never pitched in the majors was given one of the biggest contracts ever, and Matt Garza was only able to outpace Ricky Nolasco and Scott Feldman by a few million dollars.

Also, as Cotillo pointed out, the Dodgers and Yankees might still get involved, and their presence alone is evidential enough for us to assume something absurd could happen.

There are only a few pitchers left, and just because it seems like Garza's contract will function as a ceiling for Ubaldo and Ervin, doesn't mean it absolutely will. It probably will, but not absolutely ... probably, though.

Free agency hasn't been an especially logical enterprise this winter. If it was, why would the Yankees sign everyone except Robinson Cano -- their own guy, who also happened to be the best player available?

Because this baseball, not real life.

It doesn't have to make sense.