The former Angels and Braves right-hander will compete for a rotation spot this spring.

The Texas Rangers have added a bit of rotation depth just six days from their spring reporting date, signing free-agent starter Tommy Hanson to a one-year, $2 million deal that includes incentive clauses, as T.R. Sullivan of MLB.com and Jon Heyman of CBSSports.com reported.

Hanson will likely compete for a back-of-the-rotation gig in camp with Colby Lewis, Nick Tepesch, Robbie Ross, and maybe a couple others. The Rangers had no real need for adding Hanson or anyone else to the back of the rotation until last month, when Derek Holland seriously injured his knee while playing with his dog at his home. Holland, who underwent arthroscopic knee surgery after his fall, is expected to miss up to half of the 2014 season, so whoever gets the No. 5 spot in the rotation could stay there for a good while.

Hanson, still just 27, was pretty miserable in his limited time with the Angels in 2013. The right-hander posted a 5.43 ERA and a career-worst 6.7 K/9 rate over 73 innings (13 starts), missing significant time midseason due to a forearm injury and the passing of his brother. The one-time Braves prospect flashed some of his former promise when he returned to the club in late July -- frequently hitting 93 mph on the gun -- but was eventually pushed out of the rotation for good in August after being clobbered in three straight starts.

The common refrain -- perhaps post hoc -- with Hanson has always been that his wonky delivery will inevitably turn his right shoulder into mush. After two-plus solid seasons in the Braves rotation -- posting a 3.28 ERA and 8.4 K/9 in 460⅓ innings -- those concerns began to ring true. Hanson missed time at the end of 2011 with a shoulder impingement, and by the time next spring rolled around his velocity had vanished: 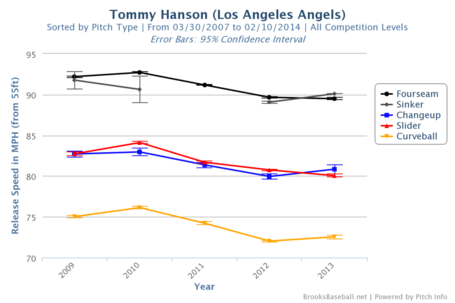 Whether Hanson can regain his former dominance in any capacity remains to be seen, but pitching in the hitter-friendly confines of Arlington probably doesn't help things much: the Southern California native was a middle-of-the-road groundball/flyball guy in his first couple pro seasons, but has become an extreme fly ball pitcher in the two years since his velocity tanked.

Hanson is entering just his second year of arbitration eligibility, so if he does make his way into the Rangers pitching staff in 2014, the club can hang onto him for another season at not too much cost.