The myriad misspendings of Mr. Moore

Share All sharing options for: The myriad misspendings of Mr. Moore

With reports out of Kansas City--and from Ervin Santana's agent Jay Alou--coalescing around the central point that the Royals are more or less done making significant moves this offseason, the time has come once again to train our focus on the money management of the organization's General Manager. For Royals fans, this is unfortunately an annual event.

The Royals rotation in gross hyperbole

Now with a projected payroll of within a couple million dollars of $90MM, one could certainly take umbrage at Dayton Moore's assertion that this is the maximum payroll figure that the Royals can support. Given the information at hand--the Forbes or Bloomberg figures, the additional $25MM* in revenue from the new national TV deal that each team gets, and the fact that the same specious statement was made last season when payroll wasn't a corresponding $25MM lower to support such a statement--one could absolutely argue that the Glass family (David and Dan, not Franny and Seymour) are stingy to the detriment of the team. In fact, Craig Brown over at Royals Review already did so (look to the right).

*[Edit: Sam Mellinger's article here debunks the widespread misinformed assumption that each team is seeing a $25MM jump in national TV revenue. What a difference a day makes. The jump is probably more like $10MM this year. If I were to speculate, the original figure was likely derived from an AAV on the entirety of the national deal, while the deal itself sees each team's revenue generated from the contract starting lower and growing each year.]

These arguments have their merits.

Regardless of those merits, one has to assume that Moore was working with a ~$90MM budget (best estimates place their payroll at just a shade under $91MM) from the onset of this offseason. Given those payroll constrictions, Dayton Moore squandered a large chunk of his resources on players of dubious import. Once again.

Just how has Moore [re-]screwed the pooch?

Here are the fungible, low-upside assets that Moore and the Royals are committed to in 2014:

Moore has never been one to allocate his funds wisely, but that's one-third of the Royals' 2014 payroll that could be classified as fungible. And that's putting it kindly.

Jeremy Guthrie was kind enough to restructure his deal--which of course means that he'll be the gift that keeps on giving in 2016, when the Royals will have to pay at least his $3.2MM buyout if they do not exercise the $10MM club option--and at the time is was reworked it was thought that the $3.0MM saved this season would be used to sign an upgrade to the rotation.

That upgrade was Bruce Chen.

No, there's not another Bruce Chen. 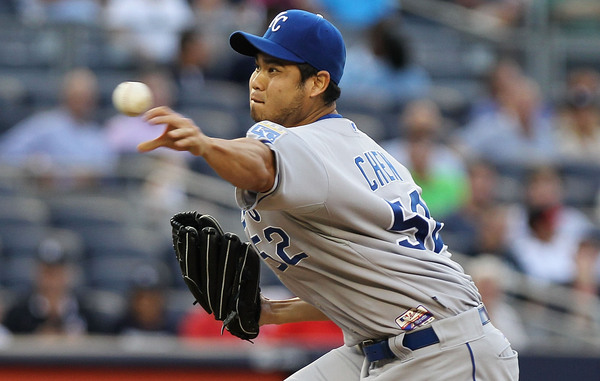 Moreover, when Bruce Chen inked his deal, Moore decided that the 40-man roster casualty would be Emilio Bonifacio, the same man that the Royals had offered arbitration to and come to terms on a deal with just a month earlier. With the way the roster had been constructed, it made no sense to pay a utility player $3.5MM, especially given the now clearly limited resources that Moore claims to [have] be[en] working under. Clearly, the Royals didn't feel like Bonifacio was the answer at second base, presumably from the early-goings of the offseason seeing as though they signed Omar Infante half-way through December. This would probably indicate that they were at least in preliminary discussions with Infante when they offered arbitration to the superfluous Bonifacio.

And of course, there is the $10.01MM due to the combo of Hochevar and Davis. Avoiding the discussion as to what deeper failure each man's presence on the Royals' roster represents, a team with this self-imposed cap could probably find a better place to spend a ninth of its payroll than on two set-up men.

And then there is the Jason Vargas deal. Four years. $32MM. I think this says enough:

It doesn't take a leap into the fantastical to envision a scenario in which the Royals were to sign Ervin Santana, Matt Garza, or Ubaldo Jimenez to go with the impact signing--yes, "impact signing" in this case is a term of relativity, but Royals fans don't have much; don't take that from us--of Omar Infante.

But once again, Moore jumped from the hatch sans parachute on the offseason, refusing to wait to see if a parachute would present itself, hoping that there was a sea of goose down to cushion his skyfall. Rather than wait for the market to take shape, he signed Jason Vargas to what ended up being an above-market deal. He handed more money than was necessary to Bruce Chen. He found a need in an area that could have been replenished from within the organization (the bullpen) and decided to throw $10MM at it, or at the very least $5.21MM for Hochevar, who could have been non-tendered and granted free agency.

Moore is woefully inept at allocating resources at the Major-League-level and constructing a 25-man roster. David Glass may in fact be the anti-Christ as some in Kansas City would have you believe, but a capable GM could have used his resources in a way so as not to enter the 2014 campaign with a rotation of James Shields and a bunch of #4/#5 starters with little-to-no upside. Maybe Yordano Ventura and Kyle Zimmer can bail Moore out this year, but that would be the first time that the Royals would have produced an above-average starting pitcher since Moore and Minor League Pitching Coordinator Bill Fischer started molding starters into relievers or failed prospects.