The potentially larger implications of the Royals' Jimmy Paredes claim

While the Dominican utility man is far from a threat to Mike Moustakas, the Royals' waiver claim of Jimmy Paredes could have larger implications for the disappointing prospect.

Share All sharing options for: The potentially larger implications of the Royals' Jimmy Paredes claim

For the most part, when a team claims a player off waivers at this juncture in the offseason, very little should be read into the move. These are typically players who were cut from a 40-man roster for reasons including but not limited to being redundant, lacking in minor-league options, and/or possessing only a marginal level of talent.

This offseason, Jimmy Paredes has been placed on waivers by three different clubs: the Astros, the Marlins, and the Orioles. Since the November 1, 2013, Paredes has tried on four different uniforms (theoretically, at least) without once stepping onto the field. This is pretty much the definition of fungibility.

The fact that Parades has now been placed on waivers by three teams--each of whom had a worse record than the Kansas City Royals last season--should speak volumes as to how highly valued Paredes is. That isn't to say that the Royals do not highly value him, of course; after all, he has only posted a BB% over 5.0 once in his minor league career. There is little Dayton Moore values more highly than a player with an aversion to drawing a walk. Because of how the waiver process works in Major League Baseball, it is entirely possible that the Royals placed a claim on Paredes each time he was made available and that this was just the first time someone with a higher waiver priority (read: a team with a worse record last season, as waiver priority is determined by which team had the worse record) didn't claim him before he fell to the Royals.

Still, Jimmy Paredes is a guy who could very well be a 40-man casualty before the Royals break camp. The likelihood of Paredes playing an integral role in the 2014 campaign in Kansas City is quite low.

Paredes has managed a whopping 118 games played in the Majors over the past three seasons in Houston. With such a disjointed Major League career, it is hard to infer too much meaning from his .260 wOBA and 60 wRC+ other than the fact that he's probably not that good. His line in AAA-Oklahoma City has been much more palatable, as he's hit .306/.347/.471 in the friendly confines of the PCL while having a wOBA over .352 and wRC+ over 108 each season. Obviously these were his age-23 and age-24 seasons, so it wasn't as though he was young for the level and absolutely crushing it, but these data points do point toward the possibility that he is perhaps capable of more than his Major League career has shown thus far.

That said, the Royals claim of Paredes is not without its elements of intrigue, at least as things pertain to the hot corner and Mike Moustakas.

Like the last heir to the Throne of Brett, Alex Gordon, Moustakas's first few years in Kansas City have been largely disappointing. When both first arrived in Kansas City, they carried the burden of perhaps unreasonably high expectations.

While Gordon always drew enough walks to have an OBP on the right side of .300, his approach at the plate left much to be desired those first four seasons. Moustakas does not have Gordon's eye and his approach at the plate leaves much to be desired. This has meant that the former Next Big Thing at third for Kansas City--and please get your children out of the room before you read this--has [not] hit his way to a .244/.296/.385 triple-slash over his first three seasons. 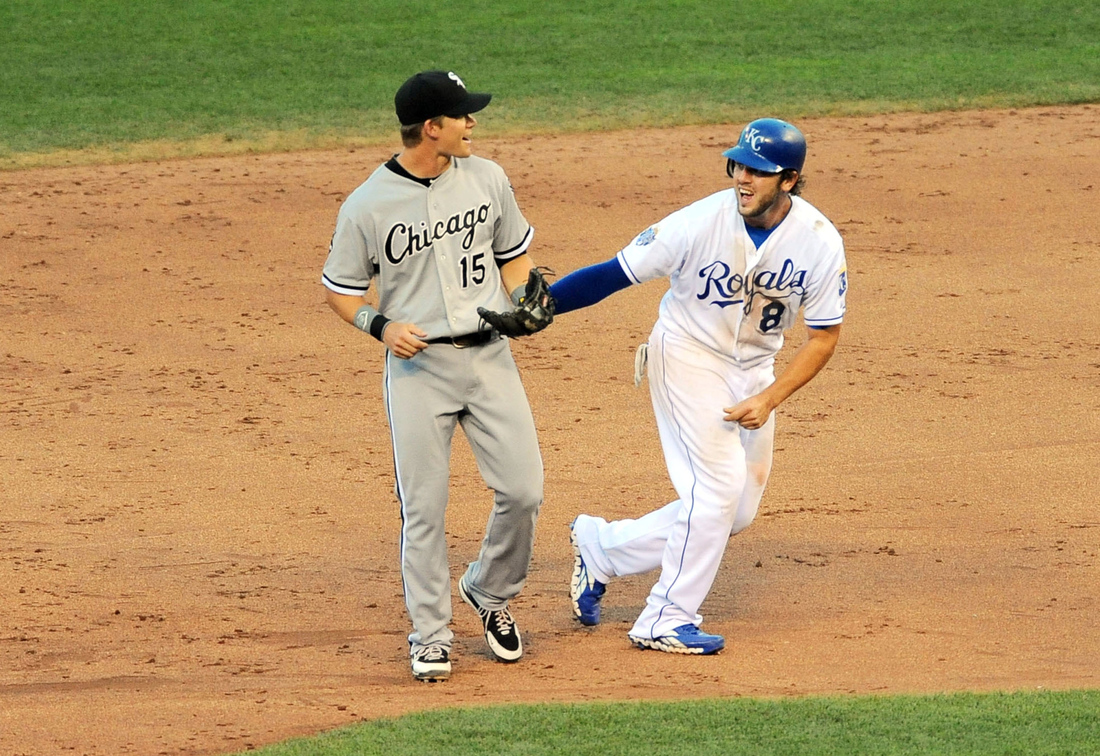 There's no palling around with the opposition in baseball. Photo credit: Denny Medley-US PRESSWIRE

Yes, that triple-slash is brought down by a .222/.275/.332 slash against LHP. Unfortunately for the Royals and their fans, he has still only been good for a .308 wOBA and 90 wRC+ against RHP on his career. Yes, that's 10% below average on the strong side of his platoon split.

When the Royals traded the superfluous David Lough to the Orioles earlier this offseason, it stood to reason that Danny Valencia was being brought in to spell Moustakas when facing lefties against whom Moustakas has been largely terrible. While the acquisition of Paredes is most likely to be able to give the Royals more multi-positional depth on the 40-man roster--a likely replacement for Emilio Bonifacio at a fraction of the cost--it could be more than a coincidence that Paredes is at least capable of sitting in at third and happens to hit much better against RHP than LHP, making for a non-godawful potential platoon with Valencia if the bottom falls out at third.

The Orioles have agreed to a four-year deal with Ubaldo Jimenez, according to reports.

Craig Kimbrel and his extension are exceptional

Long-term commitments and relievers are typically a pretty bad combination, but for Kimbrel, the Braves were smart to make an exception.

Paredes is extremely unlikely (read: not going to happen) to challenge Moustakas for the starting gig at third base in Spring Training. However, if Moustakas struggles out of the gate, he could see himself facing a fate similar to Alex Gordon in 2010.

With Major League service time always being an issue with a small market team like the Royals, Gordon was sent down to AAA-Omaha after spending the early-goings of the 2010 season struggling. The stated intent of the move was to let Gordon learn to play left field before calling him back up. What the move also did was delay Gordon's eligibility for free agency by a full year, as his 2009 campaign was derailed by injury and all that time on the DL and rehabbing in the minors counted towards his service clock at the Major League level.

As it stands right now, Mike Moustakas has accrued two years and 111 days of service time. If Moustakas is as abysmal as he has shown himself capable of being early in the season, the Royals could send him down in an effort to delay free agency by a year. Moustakas would have to spend 60 or fewer days on the Major League roster this season, so it would be hard for the team to justify a leash short enough to send him down with just a month in the books (one would assume a September call-up would almost be a given). The Royals could certainly point towards something like Moustakas's unwillingness to watch video as a reason to try to instill in the third baseman a need to go back to basics and refine his approach at the plate. Much of Alex Gordon's improvement was chalked up to his finally agreeing to overhaul his approach at the plate after he decided his performance was untenable for himself.

If the Royals were forced to make such a move, it would seem that Jimmy Paredes is a very cheap Mike Moustakas insurance policy. Moustakas's seat is far from being hot, but it would seem that the Royals have made moves to ensure that a black hole doesn't open up at the hot corner in Kauffman Stadium, enveloping the team's hopes in its cavernously gaping maw.