The Good, the Bad, and The Ubaldo

Ubaldo Jimenez's career has played out like a movie so far, his blazing first act leading to a depressing second act. Will Baltimore be the triumphant climax or the heart-breaking denouement? Which version of the pitcher will the Baltimore Orioles get and will it be enough to win the wild, wild, um, East?

Share All sharing options for: The Good, the Bad, and The Ubaldo

If we are to make the assumption that every person is living in their own movie, then the simple fact of the matter is that most are incredibly boring, the VHS and Betamax copies of our lives eventually winding up in the dumpster outside of that Blockbuster that closed down three months ago. If you were to make one of mine, you'd get a real frightening dose of Reddit under the auspices of "research."

But Ubaldo Jimenez, fresh from a four year, $50 million deal with the Orioles, has a career ripe for the big screen. In fact, Jimenez's career arc makes him the perfect fit for that forgotten cinema genre, the Western.

Just look at this image that was most certainly released by the Orioles after the signing: 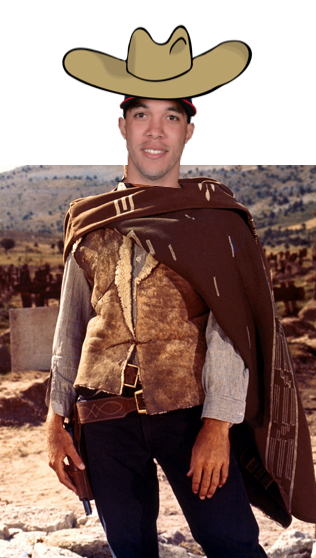 Just to give you a taste of how Ubaldo's film would play out, here are a few selections from my film, How Ubaldo Got His Groove Back.

We keep hearing that teams don't want to give up a draft pick to sign free agents who received a qualifying offer. Are they making too big a deal about these picks?

The Orioles have agreed to a four-year deal with Ubaldo Jimenez, according to reports.

Ubaldo Jimenez saunters into the bar, his spurs clanking against his athletic cleats. Tall and lanky, Ubaldo's socks are pulled up high, drawing attention to himself in a sport that often punishes those that stand out.

A group of highway thieves, big and burly, sit playing cards and look up when Ubaldo walks in.

THIEF 1: Well, whattya we have here? Rookie just wandered into the wrong part of town.

THIEF 2: Reckon we could take him?

UBALDO: I wouldn't do that boys.

Before the thieves could even pull the baseballs from their holsters, Ubaldo had peppered the bar with 97 mph fastballs. The bar is filled with broken glass and a chandelier comes crashing down, Ubaldo hitting his mark only half the time. Still, the times he does connect, it's impressive, shooting out the gold teeth of the thieves before they teeter over backwards like cartoon characters.

After being elected Sheriff of the West, getting an enormous salary along with it, Jimenez begins to enjoy the limelight too much. Nights of steak dinners and whiskey desserts have drained Jimenez of the speed on his quick draws. After being run out of Colorado, he ends up in Cleveland where he meets pitching coach/future sidekick, Mickey Callaway, who teaches him the romance of baseball.

CALLAWAY: Jimenez, you gonna keep on throwin' or do you wanna learn how to pitch?

CALLAWAY: Then we're going to need to do a LOT of training. 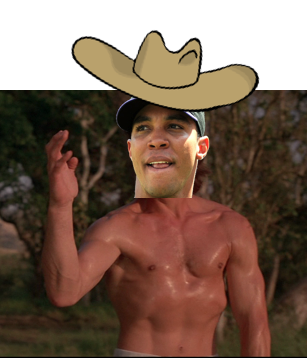 (Another real image, most certainly not taken from Roadhouse. Screen grab via Fogs' Movie Reviews)

After taking Calloway's teaching to heart, Jimenez has cleaned up the mean streets of Cleveland and has been sent on his way, winding up in Baltimore.

DUQUETTE: Ubaldo, can you protect the fair citizens of Baltimore from those demon scourges in New York and Boston?

JIMENEZ: I dunno, you tell me.

But that's where we're stuck. Where does our story end? Will it be a triumphant, action-packed ending like The Good, the Bad, and the Ugly, or will it be bloody, painful, and depressing like Unforgiven?

While it's always the safe bet to yell, "Regression! Regression!" anytime a player has a triumphant, seemingly out-of-nowhere season, this may not be the case with Jimenez. Because if there is one thing that statistics tend to miss, it's the actual adjustments a player makes when they address their faults and come up with a solution.

And for Jimenez, this isn't just the kind of lip service you get with spring training reports of players "in the best shape of their lives," or "excited about unveiling a new pitch." After a shocking and disappointing 5.03 ERA between '11-12, Jimenez looking lost on the mound, his velocity deserting him, Jimenez made noticeable changes last season.

Not only did he smooth out his delivery with the aid of Callaway, Jimenez started throwing his sinker and slider more often than his four-seam fastball, throwing his fastball the least amount of time since 2009. The adjustments apparently worked. After starting the year 0-2 with a 10.06 ERA through 4 starts, Jimenez posted a 2.61 ERA in 165 innings from April 29th on, a fairly large sample size.

While a transition to the AL East and having to face the Red Sox, Yankees, Rays, and Blue Jays, all with deep and powerful lineups that are more frightening than Joe Mauer's sideburns and the husk that remains of Adam Dunn, at only 30 years old, the opportunity is there for Jimenez to be a contributing member to the rotation long throughout the four years of his contract.

And just look at Jimenez's fWAR over the last six seasons:

Other than that horrible 2012, when he lead the league in losses, Jimenez has been worth between $15 and $26 million a year. For a player that many think has been inconsistent, that seems to be remarkably steady.

The real problem for the Orioles is how top heavy the team is. The rest of the rotation behind Jimenez is still thin, filled out with the likes of Wei-Yin Chen, Chris Tillman, Miguel Gonzalez, and Bud Norris (Kevin Gausman now on the outside looking in). While they're all serviceable pitchers, they are middle-to-back of the rotation types that don't inspire much fervent support.

The lineup isn't much better. Last year, only three regulars as defined by Baseball-Reference had an OPS+ over 100: Chris Davis, Adam Jones, and Danny Valencia. Valencia is gone, being sent away in exchange for David Lough; Davis, while still expected to anchor the lineup, is unlikely to hit another 50 home runs; and, well, Adam Jones is Adam Jones. Unless you feel like nitpicking his OBP (and I don't), there's nothing bad to say about Adam Jones.

Sure, Dan Duquette and his constant needling at the roster could find an unexpected bargain. Jemile Weeks could morph into the player he was always expected to become and Tommy Hunter could become a shutdown closer at the end of the bullpen. Matt Wieters could start resembling the player we all dreamed of and Nick Markakis could rediscover his power stroke. But for a team with a talented corps of players, the Orioles still have lots of question marks in a division that punishes them.

Westerns tend to be stories about lonely men riding on the edge of society. They come to town, save the day, and ride off into the sunset. Maybe Jimenez will keep playing the role, Jimenez leading the Orioles to the cache of gold in the cemetery. Unfortunately, baseball is the story of 25 men. And that's where the Orioles come up short.