What to do when there's nothing to root for: The 2014 Twins edition

Wins won't really matter for this year's Twins squad. What can Twins fans hope to see with the 2014 incarnation of Terry Ryan's squad?

Share All sharing options for: What to do when there's nothing to root for: The 2014 Twins edition

It is pretty safe to say that, barring something going beyond divine intervention, the Minnesota Twins of 2014 will be looking to 2015 and beyond before even taking the field on Opening Day. If you had told the average Twins fan in 2010 that they would be bracing themselves for another 95-plus-loss season, they would have laughed in your face. But injuries derailed the team in 2011 with Justin Morneau, Joe Mauer, and Denard Span all missing roughly half the season and the rotation featuring just two starters who logged more than 150 innings.

It didn't get discernibly better in 2012 or 2013, with the Twins following their 63-99 2010 with consecutive 66-96 seasons. Currently, oddsmakers set the 2014 Twins over/under at 65.5. Clearly there isn't much for the fans in the Northwoods to look forward to--at least at the Major League level. When one looks at their third-order W-L record of 67.3 - 94.7 good for fourth-worst in baseball last year, it would be nearly impossible to argue that the Twins--who are only marginally improved for the 2014 campaign--can realistically hope to be playing meaningful baseball in July, let alone September.

That is, of course, if one is predominantly concerned with wins. As a lifelong Royals fan, I'm not even sure what a win is or what it means, so one can clearly watch baseball games with little concern as to who "wins" and who "loses."

These storylines are ones that the Twins can look to with a feeling resembling hope:

Getting a long, hard look at Josmil Pinto

While anyone hoping for a repetition of his .342/.398/.566 triple-slash that he produced in his 21-game stint in the Bigs this past season is probably in for some disappointment, Pinto has spent the past two seasons raking in the minors. In fact, both Steamer and Oliver are projecting his bat to be much closer to league-average (.318 and .317 wOBA and 100 and 99 wRC+, respectively)--which is still great for a catcher--than the .418 wOBA and 169 wRC+ that he sported in that short stint last season.

Given the fact that Pinto is still trying to recover from a nagging shoulder injury, the Twins might opt to depart from Fort Myers with Chris Hermann and/or Eric Fryer backing up the presumptive favorite to start at catcher, Kurt Suzuki. Since the Twins are likely going to be battling to not finish last in the division, that would probably be the prudent decision, as Pinto had 30 days of Major League service time last season, but a call-up sometime in mid-May would delay free agency for the Venezuelan catcher by a full season. Regardless, if Pinto is healthy, Minnesotans could see Pinto growing more confident behind the plate while also getting some reps at DH for the final four-and-a-half months of the season.

For comic effect, I almost ended the piece here, but let's trudge on.

The fact that the Twins had the second-worst starting pitcher in baseball last year (in terms of fWAR, 4.6) was surprising to me. It was surprising mostly because I assumed they were the worst, but San Diego bested wursted worsted them by 0.1 fWAR despite having pitched 51.1 more innings. That's remarkable San Diego. The remark that springs to mind is: Did you know your starting pitching was worse than the Minnesota Twins' last year, San Diego?

How bad was the Twins' starting pitching last year? Shockingly their pitching staff was actually improved from their 2012 incarnation, which worse worth a mindnumbingly low 2.7 fWAR. Dead last in innings pitched with a paltry 871.0. If we throw out the 2012 Rockies starting pitching experiment, you have to go all the way back to the 2008 Rangers to find a team with fewer than 871.0 IP thrown by its starters. Their starters' collective 4.93 K/9 was so low that to find a team with a worse K/9, you had to go back to 2006 and the Kansas City Royals, a team so bad that Zack Greinke preferred to stay in Double-A to pitch in games that meant something. That team's K/9 was just barely worse at 4.91. Yes, this Twins rotation was as bad as the Royals' rotations of yore.

The 2014 Twins will actually trot out Ricky Nolasco, Phil Hughes, Mike Pelfrey, and Kevin Correia, all of whom are projected by Steamer to be worth 1.6 fWAR or more (Nolasco is projected for 2.4 fWAR(!)). Don't look now, but the Twins could get 8.0+ fWAR out of their starting pitching this year. 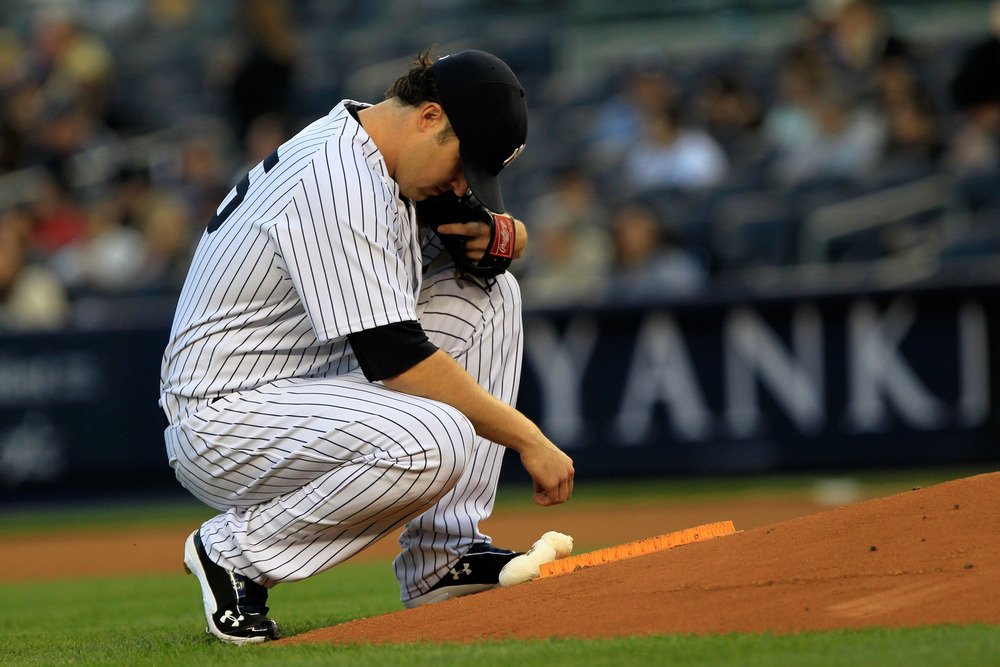 Furthermore, it is possible that Phil Hughes could actually benefit from the new environs he will call home for roughly half his starts, Target Field. He goes from the ninth-friendliest park for home run hitters to the 26th. It isn't unreasonable to think that Hughes could enjoy a resurgence in Minnesota. At three years and $24MM, it is hard to argue with that small gamble. In Hughes, the Twins potentially have a second #3 pitcher to go with Nolasco. This means the Twins of 2014 have a rotation of a #3, #3/#4, #4, #4, and #5, a marked upgrade from their rotation last year of two #4s, a #5, and a bunch of #8 starters.

Oswaldo Arcia maybe figuring it out

Standing out in the free agent market

With spring training in full gear and a number of big name free agents still waiting to be signed, it's time to get creative. Will these last minute job applications land anyone a steady gig before the season starts?

Give us your tired, your poor, your huddled masses yearning to sign multiyear deals for millions of dollars in free agency ...

Standing out in the free agent market Orioles rumors: Baltimore as 'The New Colossus'

The rational part of your brain does not recognize that Jason Kubel, Jason Bartlett, and Matt Guerrier aren't really that good any more. They were members of those two first-place teams in the AL Central. What better way to trick yourself into thinking these games matter than to slip into a dream state in which you actually believe you're watch decade-old games that mean something? Don't listen when your friends wife girlfriend mother insists it's 2014. It's 2004 and the Division is the Twins' to lose. The only thing that has to happen is for Johan Santana to sign a split deal to come back to Minnesota, and the 10-Year Reunion Tour will be on.

As a Royals fan, I can safely say that the best way to get to sleep at night is by hoping on youngsters and deluding yourself into thinking you're watching something else. In this case, delusions are probably healthier than the alternative.