All the best pitching prospects in the world might not have stopped Boston from adding Chris Capuano. That's just how they roll.

Share All sharing options for: The Slow Train to Boston: Once again, the Red Sox buy veteran depth, slow-play prospects

Last Sunday, when Ryan Dempster decided he would not play in 2014, the Red Sox could have very easily shrugged their shoulders and slid a few names up the depth chart. Even without Dempster, the Red Sox still would have had one of the deeper rotations in the game. Behind the starting five of Jon Lester, John Lackey, Clay Buchholz, Jake Peavy and Felix Doubront, Boston has several intriguing options just a phone call away in the bullpen or in Triple-A Pawtucket. Brandon Workman rose from starting in Double-A to pitching- and hitting- in the World Series as a reliever last season. Allen Webster struggled badly in seven starts with Boston last season, but the 2013 Baseball America top-100 prospect dominated Triple-A hitters late in the season last year and he may not be long for the minors. Add Anthony Ranaudo, Henry Owens, Rubby De La Rosa and Matt Barnes to the mix and there is a very good chance that at least one player emerges as a viable solution if Boston needs someone to step into the rotation for an extended period.

But the Red Sox did not respond to the loss of Dempster with indifference. Instead, they went out and signed veteran lefty Chris Capuano. Capuano will take Dempster's role in the bullpen to start the season and he will almost certainly be the first line of defense if one of the Red Sox starters falls to injury. Boston is a big market team with its own television station and the Red Sox front office has all the money that comes with those two advantages, so it is easy to look at this deal and think, "well, why not?" They have the money."

That is true, of course, and at a base salary of $2.25 million, Capuano is a minuscule risk for their budget, but that doesn't entirely explain this move. Roster spots are valuable even beyond the money it takes to fill them and the Red Sox would not be well-advised to waste a spot on a player they don't need. They were stuck with Dempster because of his deal, but without him, they were still not willing to turn the sixth starter role over to the bevy of young arms. This isn't because they don't believe in guys Workman, Webster, Owens, Ranaudo or Barnes. The Red Sox simply do not rush prospects and they will spend a few million on a veteran stop-gap to make sure they don't have to every time.

Consider the case of Clay Buchholz. The Sox righty got his first taste of the show in 2007 at the tender age of 22. In his second start in the majors, he threw a no-hitter. He wasn't great in his other two starts that season but Boston was marching towards the playoffs and he offered them the same kind of impact arm in the bullpen that fellow minor-league starter, Joba Chamberlain, was giving the rival Yankees at that time. Rather than giving into temptation and installing Buchholz in the eight inning, the Red Sox shut him down after 22 2/3 innings in the show and a total of 148 innings overall. Boston didn't stop there, however. The lanky youngster bounced between the minors and the majors for two more seasons before becoming a full-time major leaguer in 2010 and posting the best ERA+ in the league. His 2008 numbers in the majors show he still had a good deal to learn at that point, but he was still bouncing back and forth between Boston and Pawtucket the next season when his ERA was better than league average and his minor-league numbers were exceptional. Oh yeah, and the 2009 Red Sox gave Brad Penny 24 starts and Paul Byrd and John Smoltz combined for 14.

Kevin Youkilis rode the slow train too. He broke in with the Red Sox in 2004 when starting third baseman Bill Mueller went down and hit a very respectable .260/.367/.413. Mueller returned and Youk went back to Triple-A and stayed there behind Mueller on the depth chart for most of the 2005 season, despite hitting .278/.400/.405 in the 95 plate appearances he did get in the majors that year. They moved slowly with Jon Lester while Matt Clement and David Wells tried to eat innings in 2006 and again, at the start of the 2007 season, when Julian Tavarez got the call to start. Even though Jackie Bradley Jr. appears to be the heir to Jacoby Ellsbury, Boston has hedged that bet by signing Grady Sizemore this offseason. 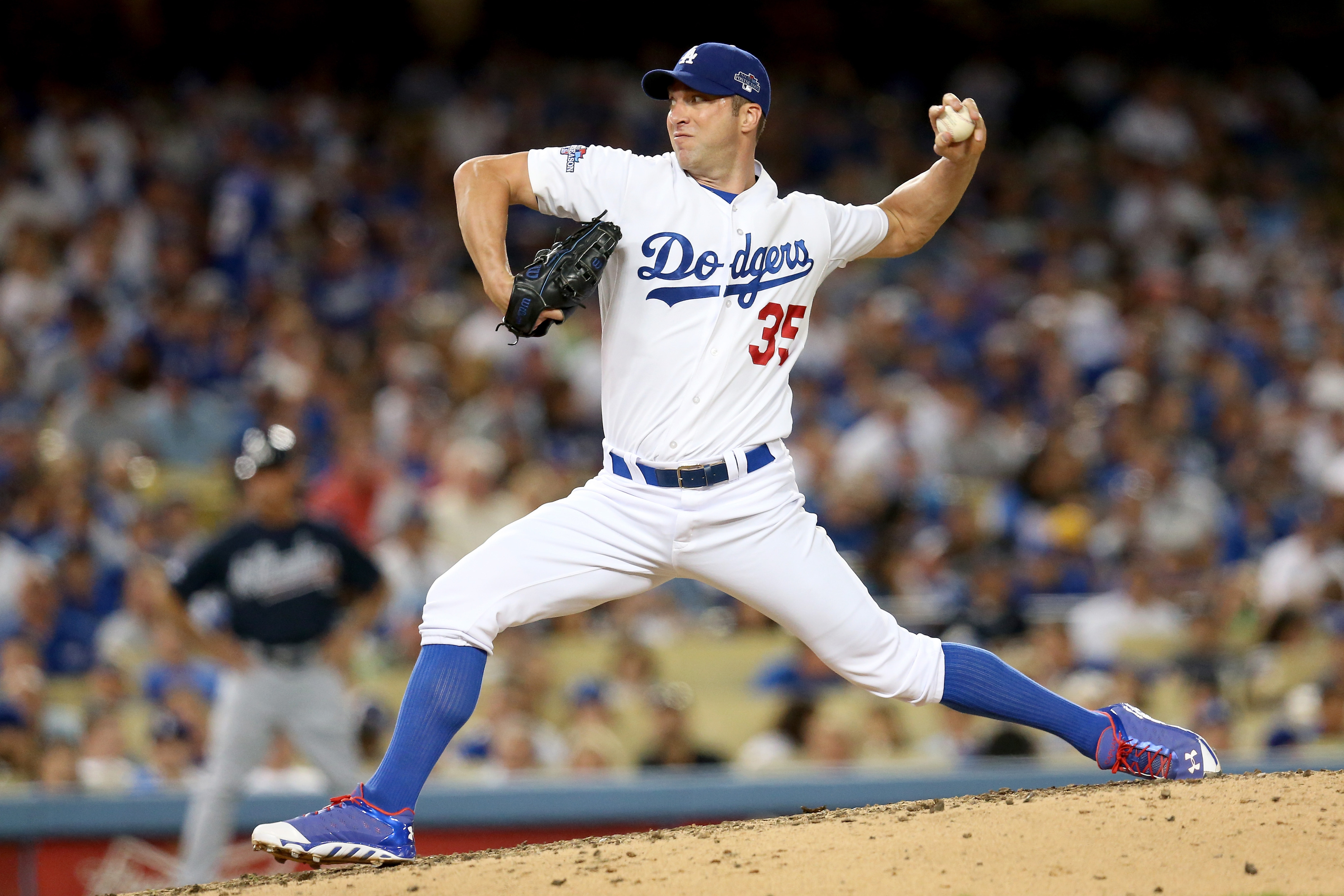 Chris Capuano is the latest in a long line of veteran depth additions for Boston Photo credit: Stephen Dunn/Getty Images

There are several motivations behind this slow development strategy in Boston. To start with, they are making the most of the system of minor league options by using their prospects this way. Rather than committing to a player like Bradley, who is capable of being sent up and down between Triple-A and the big leagues, they give a player like Sizemore a little money and a shot at the playing time. Bradley can always be called up if Sizemore fails, but there is a limited period of time where they will be able to acquire players who can potentially fill starting roles. If they proceed with Bradley from the start of the offseason, they won't have a solution ready if he fails. There is also service time to consider. If a player like Workman or Webster absolutely dominates in Triple-A, but Capuano proves to be a reasonable stopgap as well, they team gets adequate production until the time when the next great Red Sox starter is in Super-Two status range.

Those are very real practical concerns, but I think the strategy has more to do with development than roster management. There is no bigger jump between leagues than the move from Triple-A to the majors. Thousands of players never successfully make that leap and are doomed to Quad-A careers. All of those guys can play baseball at an elite level compared to everyone else who isn't in the majors, but that final step eludes them. The Red Sox have money to spend and expectations to meet and throwing a young player into the spotlight to sink or swim is not a decision they take lightly. They might chance it with a guy like Dustin Pedroia, who would step into the ring against Manny Pacquiao expecting to win even if he had just been laid out by your grandmother, but they aren't going to make a habit of it.

In the Red Sox system, a prospect earns a chance at the majors and they can stick there if they are great but even top prospect status and some early success doesn't earn them a secure place as long as they have options. They have to keep getting better, they have to wait and they have to beat out veteran guys like Chris Capuano before they can stick. This development strategy has helped Boston develop major league stars instead of just top prospects. The Red Sox draft well and they spent big on the amateur market before the new draft slots. Even now, they do their best to get extra draft picks when the opportunity arises, but simply having a wealth of talent in the minors doesn't guarantee results at the major league level. Many of the players the Red Sox have eased into the majors have reached something that resembles their ceiling and not every organization can claim as much.

Plenty of others have been busts as well, of course; there are guys like Jon Lester, but there are also players like Michael Bowden. Still, with this strategy of a slow transition to the majors, Boston appears to be ahead of the curve in yet another facet of the game. They give their prospects ample time to make adjustments and they are an appealing destination of veterans in need of a one-year deal. It might be frustrating for Red Sox fans to see a known-quantity like Capuano take the hill even when guys like Ranaudo, Barnes and Owens start blowing away Triple-A hitters, but no one is complaining about Jon Lester or Clay Buchholz right now and the lasting success they have found is worth a great deal more than a few extra starts early on.