Will he be worth it?

Duquette on MASN: "For this team and city right now, this was the right thing to do (give up the draft picks)."

Dan Duquette tells MASN "We have been looking for a No. 5 hole hitter for a couple of years to slate behind Jones and Davis."

So, was it worth it?

The immediate reaction to that question is "Yes, clearly it was worth it. They only paid $8 million for him." Well, that's true. But they also surrendered another large chunk of their budget for the June draft, and Cruz wasn't festering on the open market for no reason.

He was unsigned because he isn't that good. $8 million is a fair price for him. He's been worth about a win-and-a-half over the last three years, and one win is worth between $6 million and $7 million in free agency -- depending on who you ask. However, the Orioles spent more than that on Cruz.

When they signed Ubaldo Jimenez, the club forfeited this first-round pick and the (estimated) $2M -$2.5M associated with that pick. Their draft budget probably would have come in at between $7M and $8M originally, but by signing Jimenez, that figure was slashed by 30 percent. Fair enough (sort of). The O's wanted a starter, they got a pretty reasonable deal (4 years, $50 million) , and they appeased a fan base that was growing impatient with their offseason inactivity.

Based on quotes from Duquette, the team considered the decision to sign another qualified free agent as being "easier" since they had already surrendered a significant chunk of their draft budget. That makes some sense. The collateral damage of signing another qualified free agent (Cruz) was mitigated by the rules of the Collective Bargaining Agreement. But the fact remains that the Orioles gave up their highest remaining draft pick (and the slot money associated with it) to sign a one-win player to a one-year deal. So, signing Jimenez slashed their budget by 30 percent, and signing Cruz slashed it by about 17 percent, meaning they will be forced to approach the draft with nearly half of the resources they could have had when the Rule Four rolls around, and they first pick won't come until most other teams have combed their the field a few times.

The Jimenez deal is linked to he team's decision to add Cruz, but the two choices were pretty different. Ubaldo is likely to give the Orioles 30-plus starts, and unless he falls apart again, most of those starts should be useful.

On the other hand, Cruz is only projected to post a slightly-above-average wRC+ of 109. Had the Orioles resisted the temptation to add the 33-year-old husk of what used to be Nelson Cruz, they probably would have used a platoon of Henry Urrutia and Steve Pearce at DH -- where Cruz should probably be stationed since he's become an awful fielder over the last few seasons. Urrutia is often listed on Top 10 lists for O's prospects, and Pearce, who is far from an offensive superstar, still managed to post a 119 wRC+ against left-handed pitching last season (he hits right-handed). Pearce has a career 116 wRC+ against lefties. Cruz, also a righty, has posted a 125 wRC+ against lefties in his career, and a 109 wRC+ against same-side pitching.

In other words, the combo of Pearce and Urrutia might not be much of a downgrade from Cruz, and if Baltimore had decided to stick with those two at DH, they'd be in a similar position for 2014 and a much better position for the future.

Signing Cruz -- no matter how good the deal was -- hasn't made the Orioles a significantly better team, and it's going to be a genuine bummer on draft day. 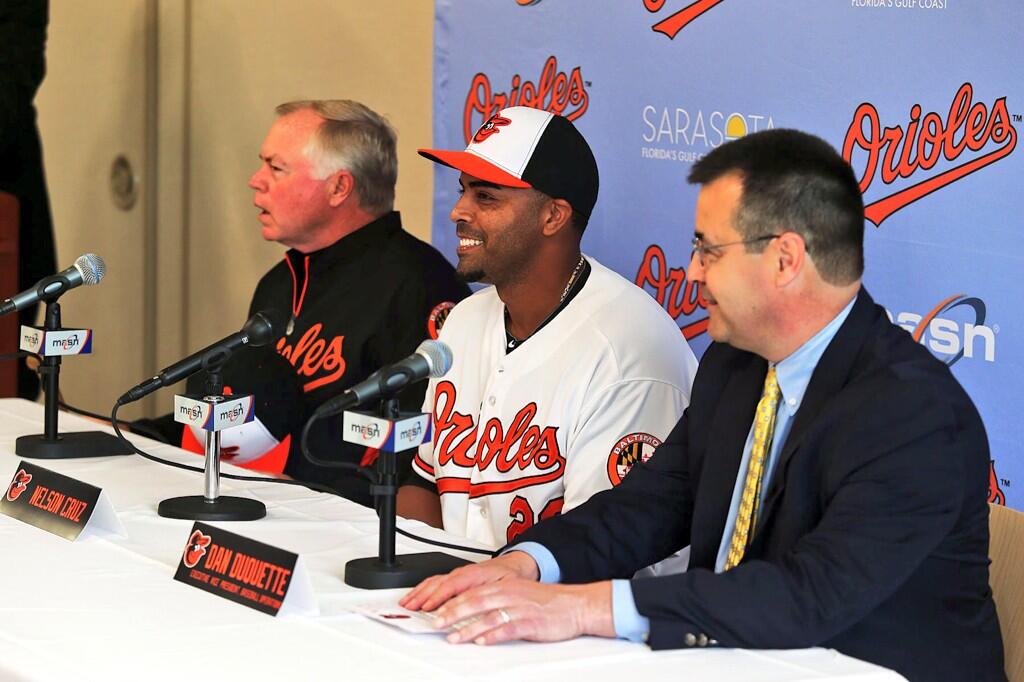 But he'll probably end up missing at least a month of the season -- something he's done every year of his MLB career except for 2012, and the lack of PEDs in his system might be conducive to even more time on the bench or the disabled list. He'll probably finish the year with an on-base percentage under .330, and he might hit 30 home runs and slug .500.

It's not going to be a major gaffe if things play out predictably, but Duquette might not have needed to sign Cruz to get decent production out his designated hitter -- and even though it didn't cost much up front, his decision to add another qualified free agent is going to sting in June, and to some extent, for several years into the future -- when Cruz is playing in Japan and the Orioles' farm system is at least a little less talented than it might have been.