Brett Gardner extension: Being There

Share All sharing options for: Brett Gardner extension: Being There

As long as the roots are not severed, all is well. And all will be well in the garden. 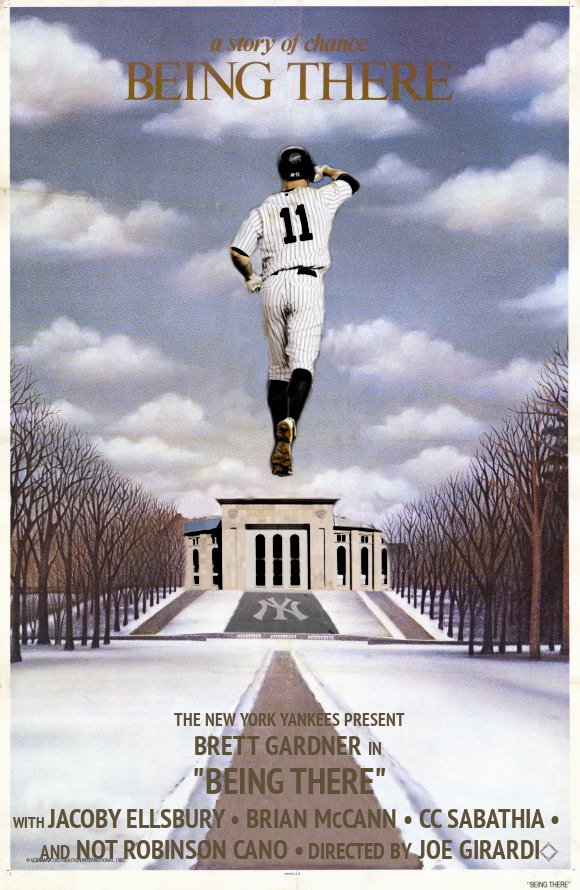 Chance the Gardener, AKA Chauncey Gardiner, stumbled into celebrity for being a pleasant imbecile.

There isn't really much of a connection short of the last name, but the Yankees did make something of an exception in their decision to extend their speedy outfielder. They decided to strengthen their roots, so to speak -- something they haven't been quick to do in the recent past.

New York typically allows their free agents to test the open market, presumably because they can compete with anyone on the open market and their primary method of acquiring talent -- at least recently -- has been adding players through free agency, thus alleviating them of the need to sully their hands with the small potatoes of extensions and the like.

So why did they make an exception for Gardner?

So, yes. He was a good great player, but is he now?

Maybe, but he'll be 31 this summer -- meaning that he'll be 35 years old for the last few months of his extension. Since his game is built on speed, almost exclusively, the temporal drag of aging could take its toll on him. A watered-down version of Gardner took the field in 2013, perhaps due to the residual effects of the elbow injury that caused him miss a majority of the 2012 season. That injury wouldn't have caused Gardner to lose a step on the base paths or in the outfield, but the missed time -- and his general submission to the icy grasp of time -- could have played a part in his diminished production.

Last year, Gardner still put up a solid .273/.344/.416 batting line, but he only stole 24 bases -- good, but not great by his standards -- and more importantly, his UZR withered down to -0.5 (-0.3 UZR/150). Maybe he'll bounce back to his 2010-11 form and post the numbers he did in his prime, simultaneously parrying Father Time's judo-grapple on his very soul ... or maybe he'll continue to age, as a normal human being, and become less and less valuable as his new contract lingers on the Yankees' ever-billowing payroll. 2014 will be a good litmus test.

As far as the Yankees are concerned, they might have taken a look at the 2015 free agent market and their less-than-spectacular farm system, and decided that they couldn't do much better than Gardner in the near future. Then again, they won't be paying a luxury tax penalty because of the new deal since Gardner's 20114 salary was already set, so maybe general manager Brian Cashman just couldn't help but spend even more money as soon as it was possible without penalty.

In extending their Gardner, New York has returned -- at least in a small way -- to the homegrown ethos that spawned their early-millennium dynasty.