Why is Ervin Santana still available?

A variety of factors could be contributing to his delayed signing.

Share All sharing options for: Why is Ervin Santana still available?

Entering the offseason, Ervin Santana was widely regarded as one of the best free agents available this winter, with many pundits, including Keith Law and Tim Dierkes, placing him among the top six or seven best players on the market. Now, just a day away from the first pitchers and catchers reporting, why hasn't Santana signed?

Let's start with the financial aspects. First off, you have the roadblock that is draft pick compensation. With the most recent CBA putting a spending cap on team's draft bonus pools, draft picks have become more valuable than ever, mostly due to the tremendous financial flexibility a high draft pick (like the first- or second-rounder most teams would have to give up) allows the drafting team. A lot of teams just aren't inclined to give up their picks. This is true for pitching-needy squads like the Angels and Rockies, who could sorely use a top-flight rotation arm, but are adamantly against surrendering their 2014 first-round pick to get one.

Santana's contract demands have also reportedly been on the more outrageous side. He was supposedly seeking a nine-figure deal earlier this offseason, and though that number has significantly dropped, the initial price may have scared a number of teams off. His most recent asking price has been pegged at $60 million over four years, and even that may be a stretch.

The fact that Matt Garza, who has been much more consistent and may be the better pitcher in general, got $52 million suggests how the market is valuing pitchers of similar stature to Santana's. Plus, it's very possible that teams could seek a slight discount just based on the draft-pick compensation. With Santana's price tag and compensatory penalty, many teams were automatically thrown out of the running for Santana, leaving a thin crop of potential suitors.

One team that seems to be a fit for Santana is the Toronto Blue Jays. With a large market and payroll, and a willingness to give up a draft pick, the Blue Jays seem to be an ideal fit, especially considering that they are hoping to contend with a rotation that includes J.A. Happ, Kyle Drabek, and Brandon Morrow. Toronto has been the only team consistently linked to Santana, and it has been widely reported that they appear set on signing either Santana or Ubaldo Jimenez.

Of course that brings up a whole different matter: his market competition.

The new playoff format means more teams have a chance at October glory than ever before. Who will surprise us this season?

With pitchers and catchers reporting at the end of the week, the 2014 positional battles will truly begin.

Who is your sleeper team for the 2014 season? Spring hopes eternal

The lack of play on the Santana market could be directly linked to the months-long Masahiro Tanaka sweepstakes that took hold of the offseason. With Tanaka being the superior pitcher in nearly every team's eyes, it was a waiting game to see where he would end up, and that pretty much froze the starting pitching market.

Additionally, while Tanaka-captivation was at its peak, Garza appeared to be the only other name who saw significant market activity, and that was almost surely due to his lack of draft pick compensation and cheaper price-tag, since one's tolerance for sacrificing a draft pick would obviously be lower on a team that had the Japanese ace in the fold.

That still leaves Ubaldo Jimenez, who is under roughly the same handicaps as Santana. He too is coming off a notable bounceback year after a horrid 2012 campaign, and is tied to draft pick compensation. However, Jimenez seems to be the better bet. He's a year younger and at his best can be dominant, whereas Santana's upside is a tad more limited. Jimenez is also often seen as having the better pure stuff, and out-pitched Santana in 2013 in many ways, including strikeout rate (9.6 vs. 6.9), home-run rate (0.8  vs. 1.1), and FIP (3.43 to 3.93). As a result, Santana may have to wait for Jimenez in order to sign.

Of course, there's also the possibility that the hold-up is with the player himself. The fact of the matter is that Santana is a risky proposition, just a year removed from posting a 5.63 FIP in 178 innings with the Angels. He really hasn't been more than a No. 3 starter since 2008 and is seeking No. 2 starter money. His velocity did jump back up slightly, adding more than half a mile-per-hour in 2013 (91.7 to 92.3), but that was still the lowest average velocity of his career, 2012 aside.

Santana has also never been truly consistent, best evidenced by the graph below: 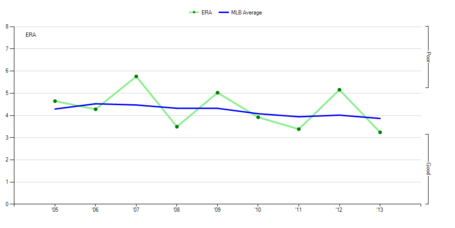 Santana should be coming off the market in the coming weeks, but it's still perplexing that he and other big name free agents (such as Jimenez, Kendrys Morales, and Nelson Cruz) are still jobless. Still, some bizarre, career-ending injury in the next few weeks not withstanding, Santana is going to be a very wealthy man very soon.