An offseason of long-term extensions and otherwise low-risk moves is potentially undone in a 24-hour period.

Share All sharing options for: The Atlanta Braves: What a difference a day makes

Taking their moves this offseason in aggregate, the Atlanta Braves' plan was clear: lock up franchise cornerstones and sign cheap free agents to add depth. As of today, they have added $276.15MM in guaranteed contracts this offseason. $267.4MM of that guaranteed money came in the way of extensions handed out to Freddie Freeman (eight years, $135MM), Andrelton Simmons (seven years, $58MM), Craig Kimbrel (four years, $42MM), and Julio Teheran (six years, $32.4MM). This ignores the fact that Jason Heyward was signed for the next two seasons, both of which were years of club control anyway. Their trading of minor-leaguer Sean Gilmartin for Ryan Doumit and signings of Gavin Floyd and Freddy Garcia added a mere $8.75MM to the rolls this year.

With their only other moves being the signing of the oft-injured Mat Gamel to a minor-league contract and Cuban defector Yenier Bello to a minor league deal with a $400K signing bonus and an invite to Major League camp, it is safe to assume that the Braves thought themselves to be more or less set for 2014 after losing just Brian McCann, Tim Hudson, and Paul Maholm as key contributors to their 96-win 2013 squad.

While Evan Gattis may not be able to step in full time and fully replace the departed McCann--especially defensively--some combination of Doumit, Gattis, and Gerald Laird can perform admirably in his stead. As McCann is a 30-year-old catcher who has played fewer games than the year prior in each of the past three seasons, with just 102 games played in 2013, it is hard to blame Frank Wren & Co. for opting to go in another direction. If Christian Bethancourt forces his way into the Major League picture, it's easy to imagine his defensive profile would be a welcome addition in Atlanta.

On the pitching front, Hudson and Maholm's departures were sure to adversely affect the Braves; but between the hopefully healthy return of Brandon Beachy and the possible contributions from 2012 second-round pick Alex Wood, it wouldn't have been unreasonable to hope that they along with Gavin Floyd and the re-signed Freddy Garcia would be enough depth to persevere the loss of their two veteran hurlers.

Given that the Braves finished ten games up on the Nationals and judging by third-order wins were still eight games better, such an internal belief in themselves was probably justifiable. Even after the Nationals added Doug Fister for a song and Nate McLouth and Jose Lobaton, it would be a stretch to assume that the Nationals have closed the gap.

Then these past two days happened. 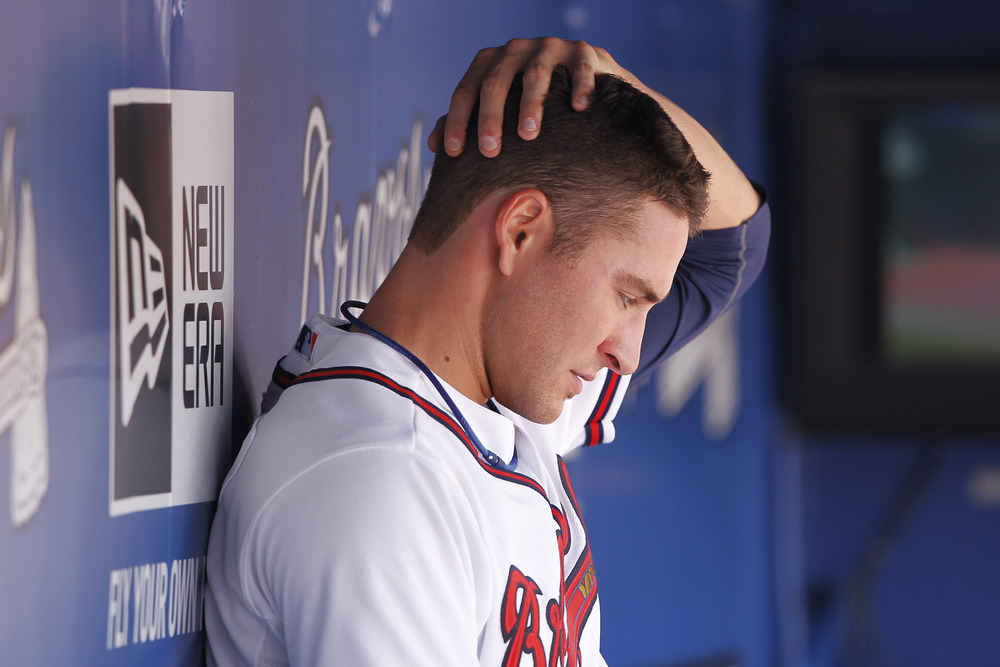 Yesterday, the presumptive number one starter for the Braves, Kris Medlen left his start with a forearm strain. With Medlen--who already has one Tommy John surgery on the punch card--and the Braves awaiting results from an MRI, Brandon Beachy left his spring start a mere 24 hours after Medlen. Also a Tommy John recoverer, he left with tightness in his throwing elbow. In the span of a day, the Braves went from a young, deep rotation to one on the verge of falling apart before they break from Spring Training. Two bad MRIs, and the Braves would suddenly, breathtakingly be stripped of their status as favorites for the NL East crown.

To attempt to add a little bit of depth to the starting rotation mix, the Braves went out and got Zach Stewart from the White Sox for cash considerations. While the only questions Zach Stewart could answer would be in the category of "Failed Pitching Prospects," clearly the Braves are feeling the need to address their suddenly dicey rotation. Despite the fact that all reports had the Braves not wanting to add much in the way of payroll, the potential disaster that beset the Braves over the course of a Sunday and Monday in early March has led to the Braves entering the Ervin Santana sweepstakes, causing many to wonder who is more desperate, Santana or Frank Wren?

Regardless of what happens with these two pitchers' respective bills of health, it is really quite staggering how quickly a playoff picture in Atlanta went from clear and in focus to a Magic Eye filtered through a pane of stained glass. The simple fact that two bad breaks could make the signing of Ervin Santana a near necessity has to be a point of shock for Frank Wren and the Braves' brass.