Braves sign Ervin Santana: Everything you need to know

Did Atlanta panic? Did they overpay? Is Santana worth the draft pick? Does this actually fix their problem? We answer all that and more with everything you should know about the Ervin Santana signing.

Ervin Santana is no longer lingering on the open market.

The Braves swooped in and signed the 31-year-old right hander to a one-year deal worth the exact same amount as the qualifying offer Santana declined in November. He had aspirations for a lucrative multiyear deal, but as the market developed, teams began searching for alternatives to players that had declined a qualifying offer -- which, in turn, would cost teams a draft choice to sign them.

An offseason of long-term extensions and otherwise low-risk moves is potentially undone in a 24-hour period.

Santana had an excellent season in 2013. He put up a 3.24 ERA in 211 innings for the Royals after being traded to Kansas City last winter.

Atlanta emerged as a potential destination for him after the team received news of Kris Medlen's elbow injury, but a deal with the Braves would have been highly unlikely for Santana if he had not scaled back his contract demands. After firing Bean Stringfellow of Proformance, Santana announced that he would begin considering one-year deals, which resulted in a renewed interest from teams around the league.

Did Atlanta panic? Did they overpay?

Kris Medlen is likely to undergo a second Tommy John surgery, which would have left a huge hole at the front of their rotation. Santana can help them fill the void, and if he can repeat his production from 2013, he will be a huge addition for the Braves. Even if he doesn't, he will provide them with a solid number of innings, which will allow the team to bring along their young arms less urgently -- guys like David Hale and Alex Wood. The team's deal with Santana is almost certainly a response to the unfortunate news on Medlen.

Most teams that showed interest in Santana after he began fielding one-year deals were offering around the same amount the Braves will pay him this season.

What to Expect Out of Ervin Santana

Just how good will the Braves' new starting pitcher be?

What to Expect Out of Ervin Santana

Is Santana worth the draft pick?

Atlanta will forfeit the 26th pick in next June's draft due to the qualifying offer. The team has a chance to recoup their draft losses next winter if they decide to extend a qualifying offer to Santana -- as the Royals did this offseason. However, Santana would have to decline the offer, and since a one-year deal worth the same amount as a qualifying offer was his best option this winter, there's good reason to suspect that he might accept if Atlanta extended the offer -- which is expected to be worth between $15 million and $16 million.

Santana is effectively "betting on himself" to prove his worth in 2014 in an effort to procure a long-term deal after the season, but the Braves are not guaranteed to win back a pick for the 2015 draft.

Does this actually fix their problem?

It will help. Santana has been as good as Medlen at times, but over the course of his career, he's been somewhat erratic. Before his bounce-back 2013 season with Kansas City, he led baseball in home runs allowed and posted an ERA over 5.00 for the third time in his career. Those down years have been punctuated by substantial usefulness, and he's averaged 194 innings per year since 2006, so the Braves can likely depend on him for 30-plus starts. Whether all of those starts will be fruitful remains to be seen.

How will Ervin fare at Turner Field? 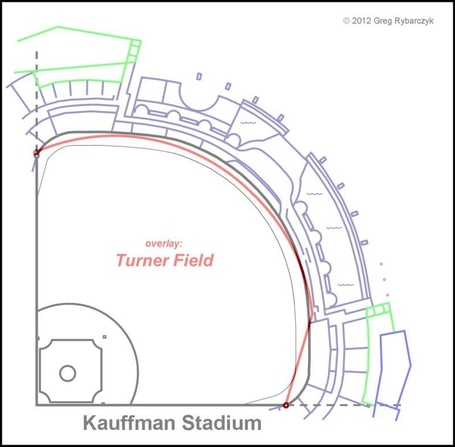 Defensively, the Braves can't quite match up with what the Royals were able to do in the field last season, but with guys like Andrelton Simmons and Jason Heyward, Atlanta has a good chance to be an above-average defensive team.

How does this alter the NL East landscape?

Atlanta might have been seen as a vulnerable team heading into the season with a rotation of Julio Teheran, Freddy Garcia, Alex Wood, David Hale, and Aaron Northcraft. With Santana, Atlanta will be able to better mitigate the loss of Medlen and keep their heads above water until Mike Minor and Brandon Beachy are ready to take the hill regularly.

At full strength, Atlanta's staff could be a considerable strength with Teheran, Minor, Beachy, and now Santana leading the way.