This offseason, the Cincinnati Reds decided to lay low, either because of financial constraints or because they hoped they could turn into a team of undercover operatives. Will the team pay for that decision or is the core of talent strong enough to push them to the postseason?

Mat Latos - torn meniscus in knee. Expected to return sometime in April, perhaps as early as the first week of the season.

When people talk turning All-Star weekend into a skills competition, it's usually because of an innate desire to see Billy Hamilton race Mike Trout, with a Mike Napoli-judged beard-grooming competition a close second. But really, the only way to truly test Billy Hamilton's speed would be to have him race around the globe, defeating planes, trains, and automobiles in the process. Then it would be fair.

After coming up last season and quickly stealing 13 bases, getting caught only once, Hamilton, somehow appears to only be getting faster, clocking an unheard of 3.3 second time to first base earlier this week. To put that in context, the average hitter makes it to first in about 4.2 seconds. To put it in even further context, it takes me roughly 400 Billy Hamiltons to decide whether I should get out of bed in the morning.

But the Reds will need Hamilton to turn that speed into a utility this season if they're going to succeed. Penciled in to lead off, Hamilton replaces Shin-Soo Choo and his .285/.423/.462 line on a team that, outside of Joey Votto, can struggle to get on base. If he can't put the fear of extra base hits into pitchers hearts, allowing infielders to move up a few steps, then i wouldn't be shocking to see something similar to the .308 on-base percentage he had in AAA last year.

Here are the things not to complain about Joey Votto: 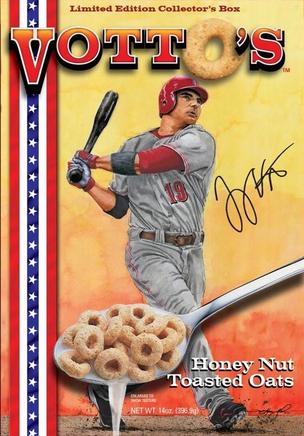 (PLB Sports via BizJournals)
While, sure, it would be great if every team's best hitter could hit .300, draw tons of walks, not strike out very often, hit plenty of home runs, and make videos asking fans to like him more--wait, you mean to tell me Joey Votto does all of that? Well, hell, I don't know what we're arguing about anymore.

Last year, despite an injury to staff ace Johnny Cueto, the Reds still had five starters throw more than 100 innings with an ERA+ over 100. If you include Cueto's 60 innings, that number jumps to six. Reds starters had the fourth lowest ERA, the third best average game score, and the second highest innings pitched per start. Even with the best of expectations, it will be hard to replicate that.

Johnny Cueto should be healthy, his 2.61 ERA over the last three years second only to Clayton Kershaw among all pitchers with at least 400 innings. The rest of the rotation fills out pretty nicely too, with Homer Bailey (fresh off his $105 million contract extension) Mat Latos, and Mike Leake all returning to the middle of the rotation. Last year's revelation, Tony Cingrani, could be an enormous boost to the team if he can repeat his 10.3 K/9, all while throwing his fastball over 80% of the time.

The Reds have arguably the strongest rotation in baseball, but the team may come to miss the guaranteed 200 innings that Bronson Arroyo provided should injuries arise.

Last year, the Reds doubled down on their investment, watching their payroll rise above $100 million for the first time in team history, winning 90+ games for the third time in the last four seasons. For Reds fans, this has been a blessed time, even with the lack of postseason hardware to show for it. Unfortunately, the money and the wins haven't been enough, and with attendance still ranking in the lower half of the National League, it's difficult to ask ownership to continue raising salary. That bore out this offseason when the Reds decided that the mighty, multi-positional, and excellent sock-wearing Skip Schumaker was the most notable addition to the club.

The loss of Shin-Soo Choo on a team that struggles to get on base will be mighty, though Billy Hamilton's defense and ability to steal bases could make up the difference. The rotation is strong 1-5, but teams often need to look to sixth, seventh, and eighth options to get through the season, and there is no prospect like Tony Cingrani waiting in the wings, ready to ride to the defense of the team. The farm system has some depth, lead by right-hander Robert Stephenson, but it's expected that he'll need another season or two in the minors before he'll be ready to compete.

While the team has a lineup and rotation ready to win now, the lack of depth could become an issue. A few injuries sprinkled liberally, and with a few down years, the team could struggle in a winnable NL Central.

How it could all go right

Joey Votto, masher of baseballs, wins a triple crown, Billy Hamilton steals 80 bases and gets on base 35% of the time, and Jay Bruce has his break out season at the age of 27, going from merely a very good player to a great one. Devin Mesoraco, handed the reins to the team, has the breakout season we've been waiting for since he was the 16th best prospect in the game before the 2012 season, and the rotation somehow reproduces last season's numbers.

The Reds run away with the division from day one, the Cardinals and Pirates both stumbling, eventually beating the Oakland Athletics in a rematch of the 1990 World Series. Chris Sabo, miraculously inserted into the lineup thanks to some obscure rule, hits the Game 6-winning home run, hurling his goggles into the air as he steps on home plate. 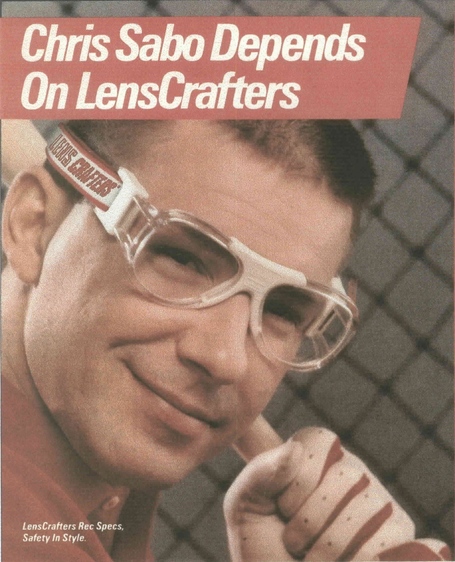 How it could all go wrong

Johnny Cueto once again misses time, Tony Cingrani's fastball is solved, Homer Bailey decides to take his $105 million and flee the country, and waiver wire pickups are relied on to eat key innings. The league enforces a rule that to keep things fair, Billy Hamilton must wear leg shackles while on the basepaths, so he only manages to steal 30-40 bases, while Jay Bruce, Brandon Phillips, and Todd Frazier fail to provide much lineup support. Midway through the year, with Joey Votto hitting .350/.500/.600, he decides that baseball is too easy so he quits to become an eyebrow model.

But really, while there are issues that make this team a difficult pre-season favorite, they're too good to expect a massive collapse.