Kevin Towers will mess you up, man.

Every time I watch that GIF I half-expect an actual baseball to bust through the corner of my screen and smoke a chalky, new crater into the nearest panel of drywall.

Last season, Goldschmidt began making his case as one of the best hitters in baseball. He was one of only seven batters to finish the season with an on-base percentage of .400 or better, and his .404 wOBA was the fourth-best in the league -- behind Mike Trout, Miguel Cabrera, and Chris Davis. He hit 36 homers, stole 15 bases, scored 103, and drove in 125.

He finished the year with a BABIP of .343. That might cause some to doubt his ability to repeat his performance from 2013. However, in nearly 1,500 career plate appearances, Goldschmidt has had a BABIP of .340 and throughout his minor league career, he posted similar numbers.

He just puts the barrel on the ball, man.

As impressive as Goldschmidt was in the batter's box, Parra might have been even more impressive in the field. In 2013,Andrelton Simmons became a household name because of his glove, and impressed the sabermetric community (and their cats) with his almost-fictional range. He posted 41 defensive runs saved (DRS). Some suggested his 2013 as the best season ever, but Parra was right there next to Simmons in terms of DRS. He posted 36 DRS in right field -- where he won the NL Gold Glove -- and 41 total DRS in the outfield in 1355⅓ innings.

Simmons and Parra tied for the new record for DRS. Unfortunately, the data set only goes back to 2002, so we can't see how these two guys stacked up against Ozzie Smith and Roberto Clemente. The mere fact that either of those two names can be reasonably mentioned in the conversation about how good Simmons and Parra were in 2013 should be a pretty monumental compliment to both players. 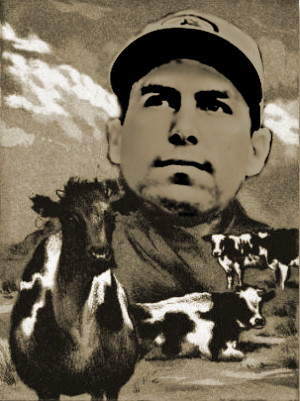 Apparently, when something is Schmidtian, it is "of or relating to Arno Schmidt" -- whose claim to fame is being largely unknown. It doesn't appear that anyone has dibs on Goldschmidtian, though ... until now.

He didn't have a Golschmidtian* season as a hitter (.318 wOBA, 96 wRC+), but his incomparable defensive led to a 4.6 fWAR. He's the easy favorite for the Gold Glove in right field again, and if his BABIP rebounds regresses closer to his career mean, he could have an even better season overall in 2014.

Bradley is one of the main talking points in the conversation about the best pitching prospect in baseball. Baseball Prospectus' Jason Parks and MLB.com Jonathan Mayo have Seattle's Taijuan Walker listed ahead of him, but Baseball America has Bradley as their top minor league arm, and every prospect list in existence has him in or near its top ten.

He approaches triple digits with his fast ball, routinely sitting between 93 and 97 mph, and his hard knuckle curve gives him a potentially elite secondary offering. He also throws a solid changeup and has "80 grade work ethic," according to Parks.

Several evaluators see him as a future ace. He make his way to the majors this season, but Arizona is likely to bring him along slowly. If he makes his debut in 2014, it probably won't be until somewhere around the All Star break.

Mark Trumbo might hit 40 homers at Chase Field, and with Goldschmidt in front of him, they could be in a better position to score runs as a team this season. A full year from Aaron Hill and a bounce-back season from Miguel Montero would certainly help.

Early injuries in the rotation are piling up quickly -- especially considering the recent news about Pat Corbin. Those losses could cause the D-backs to use Josh Collmenter and/or Randall Delgado as a starters, and while it's good that they have the depth to lean on those guys, they might need to dip even deeper into their depth this season. Corbin could miss the year, Brandon McCarthy has never started more than 25 games in a season, Trevor Cahill is banged up, and their biggest free agent signing -- Bronson Arroyo -- has a bulging disc in his almost-forty-year-old back.

General manager Kevin Towers traded a promising, young third baseman -- Matt Davidson -- for a below average reliever. Baseball's first professional Addison (Reed) might have 69 career saves, but you can rest assured he earned most of those saves as an eventual trade candidate. Towers took the bait. SAVES! Reed has a career 4.17 ERA, and it's not like pitching at Chase is going to help him with that. However, his FIP has been pretty strong in the past, and Arizona could put a pretty strong defense on the field again in 2014.

Arizona has finished 81-81 in each of the last two seasons, and Towers is earning a reputation for being something of a sap on the trade market -- not to mention incredibly vociferous about what is supposed to be unwritten rule.

Being the roughest, toughest most ornery and rules violating-est 81-81 team ever isn't an accomplishment. It's a laurel of beclownment.

He might not be on the verge of losing his job if the club misses the postseason again, but another disappointing year would be a step in that direction.

Arizona has the talent to make a postseason run, but they have to get through what looks like a tough division featuring the Dodgers and their Goldschmidtian budget, the Rockies' two-headed beast, the potentially surprising Padres, and the wide-eyed Giants.

Or worse. Either way, another ordinary season would be a certain bummer. If their starters continue to struggle with injuries, they could be forced to rely heavily on young pitchers like Delgado, and perhaps even Bradley. A trade for another starter is not out of the question at this point.

The question on offense is whether or not Goldschmidt can repeat his performance from a year ago. Either way, he could use some support from 2013 absentees Hill and Montero.