Another year, another losing season for the Chicago Cubs. But there's hope on the horizon, Theo Epstein's administration stocking the farm system with high end talent that should begin arriving this year. Will it be enough to give Cubs fans what they've always wanted?

The reigning NL East champs find themselves with a fight on their hands, and that fight isn't just from their opponents.

The name "Starlin Castro" either sounds like an intergalactic space hero or the name of the shortstop in some Matt Christopher book. And, for the first two years, that's what Castro was--an otherworldly, seemingly fictional player, hitting .304/.343/.422 while displaying excellent range if perhaps a propensity to commit errors. But after leading the league in hits in 2011 as a 21-year-old and watching his numbers dip but remain respectable in 2012, the wheels came off last year. Castro collapsed to .245/.284/.347, nearly approximating Zack Cozart's offensive line while offering little of the defensive upgrade.

In the field, Castro, loaded with tools, still struggles, oftentimes looking like a Little Leaguer more concerned with the snow cone vendor than the on-the-field action. And though he cut his errors to 22 last year, a career low, that was still tied for second most in the game. Though his range may give him extra opportunities to commit those errors, Castro will need to show renewed focus and drive in 2014 at the age of 24.

Like Castro, Anthony Rizzo was another perplexing player for the Cubs last year. After hitting 15 home runs with an .805 OPS in a half season of play in 2012, Rizzo watched his average drop 50 points, still managing to lead the team in home runs (23), doubles (40) and RBI (80). While that may work on a 66-win team, the seven-year contract the Cubs gave Rizzo before the start of last year indicates that they are expecting much more.

Fortunately for Rizzo, a lot of those struggles could be attributed to a 50 point drop in BABIP. Though Rizzo saw a dip in line drives and a 7% spike in fly balls, something that could explain his struggle in getting base hits, that Rizzo was able to up his walk rate to 11% should indicate brighter days ahead.

Though Jeff Samardzjia remains the staff ace (213 innings last season, his 4.34 ERA elevated above a 3.77 FIP), it was Travis Wood that surprised everyone. Wood reached the 200 inning plateau for the first time in his career last season, leading the team with a 3.11 ERA along the way. And though Wood relies on plenty of contact (career 6.8 K/9) and is a fly ball pitcher, seemingly making him a bad fit for Wrigley Field, he's managed to have a HR/FB rate below 7% in three of his four major league seasons. At some point, you stop expecting that trend to reverse and you assume it's a repeatable skill. Like David E. Kelley and legal dramas.

Unfortunately for the Cubs, while their farm system is brimming with talent around the diamond, their pitching prospects are a long way off, necessitating the acquisition of Jason Hammel and James McDonald. Though it wold be a lot to expect Wood to be quite as good in 2014, if he can prove to be a steady middle of the rotation cog behind Samardzjia, it would go along way to making 2014 an easier year for Cubs to take.

The Farm. As in, everybody in the minor league system. Yes, it's that good.

This is what you've really come to see, isn't it? You perverts, loving your hot, young baseball talent, oozing tools on their projectable frames. While the major league club cycles through useful-but-not-exciting pieces like Nate Schierholtz, Theo Epstein has been building a better world in the minor leagues.

Led by Javier Baez, the man with the quickest wrists this side of Gary Sheffield, the shortstop/future second baseman clobbered 37 home runs last year. Should you try to search for "Javier Baez" on a work computer, chances are the internet filters will restrict your access for featuring adult content. Unfortunately, Baez's shift to second base will soon put an end to the fan favorite and defensively gifted (if offensively challenged) Darwin Barney.

Of course, Baez moving to second base keeps third open for last year's fast-moving first round selection, Kris Bryant. After being drafted in June, Bryant saw three different levels of action, hitting .336/.390/.688 across them. Turning 22 this year, Bryant should move quickly, his massive power offering dreams of 40 home run days.

Like in elementary school when you would learn about the reproductive process by hatching baby chicks, 2014 will be the year that the first signs of major league life begin to emerge.

There's no real reason to watch for Wells as a contributor to the team, no matter how great his name. However, after seeing time with five different clubs last year (Blue Jays, Mariners, Athletics, White Sox, and Phillies), it will be interesting to see if he can best that total.

Look, I get it. Cubs fans have had to wait a long, long, long time. Continuing to wait with the promise of brighter futures is hard to do when multiple generations have died off with nary a World Series to their credit. But sinceTheo Epstein has taken over, he's loaded the team with so much talent and with a number of intriguing veteran options that it’s impossible not to get excited. My guess is that they’re just on the Back to the Future schedule: 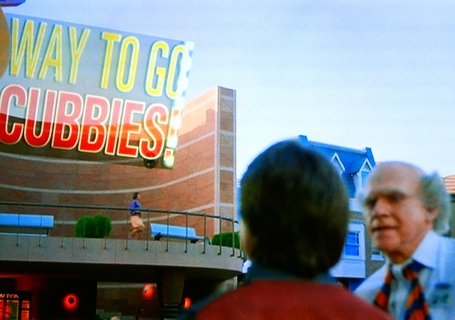 It's not hard to imagine a future where Rick Renteria, becoming the Cesar Milan of tarnished prospects, massages very ounce talent from Starlin Castro and Anthony Rizzo, watching the infield become bloated with star power as Kris Bryant and Baez joining the fold. And when that day comes, it won't be that hard to envision a World Series finally coming to Cubs town.

How it could all go right

Theo Epstein discovers how to bend the time-space continuum, allowing him to pluck the future versions Baez, Bryant, Almora, and Edwards, slotting them on a team that watches breakout campaigns from Castro and Rizzo. The rotation holds up, Samardzjia and Wood turning into a killer 1-2 combo, and Casper Wells is given a home for an entire year.

How it could all go wrong

Starlin Castro can’t get his head straight, struggling at the plate and in the field for a second straight year and Rizzo, while blasting home runs, offers little else at the plate. Travis Wood watches as every batter he faces hits a home run and Jeff Samardzjia realizes he’d rather play football after all. Javier Baez, after hitting a 700 foot laser shot, is recruited into a secret military operation where he hits baseballs at outer space aliens. While that’s bad for the Cubs, it’s good for humanity as without him, our species would die a painful death.

In summation, 2014 is the amuse-bouches of what could very soon be a Cubs dynasty. But if you can just hold on for one more year, 2015 will bring the main course.