Money is exactly what wins championships.

Of course, I'm referring mostly to Paul Maholm. After all, Clayton Kershaw never struck out a cast member from My Giant. No. Not Gheorge Muresan, but that would've been funny too.

In addition to Maholm, the Dodgers also happen to have several players that you wouldn't be able to avoid even if you wanted to. Clayton Kershaw is coming off of one of the best single-season performances since the mounds came down in 1969, Zack Greinke will undoubtedly say something awkwardly amazing this year, Hanley Ramirez could bounce back into the NL MVP race, Adrian Gonzalez will do his thing, and Los Angeles has this other guy you might've heard of too.

Either you love Yasiel Puig or hate him, but no matter which, you have to admit he's done some impressive things so far. Whether it's for his extragalactic athleticism or his sometimes erroneous exuberance, he'll be in the spotlight. Often.

Ellis might be the Dodgers most unsung hero. Which is saying something in Los Angeles. He's one of the best catchers in the National League. Seriously.

Whomever plays second base

MLB Depth Charts currently lists former shortstop Dee Gordon as the Dodgers starting second baseman. That wasn't the plan when the team signed Alexander Guerrero to a four-year, $28 million deal in October ($32 million with incentives). Guerrero has struggled with his transition to second base, resulting in an open competition and several additional signings.

General manager Ned Coletti added Chone Figgins and Justin Turner to the mix, but both project as benchplayers at this point. Miguel Rojas was the strongest in-house candidate for the opening. He'd be useful defensively, and a great hitter ... if they moved the fences in to the edge of the infield. For further depth, Coletti went back to the international market to sign Guerrero's former Cuban National teammate Erisbel Arruebarruena. 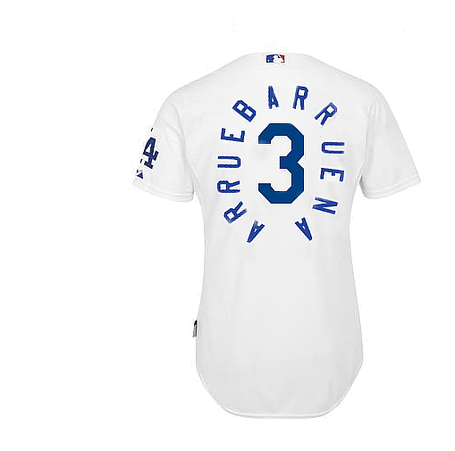 It's a fun name to say and it looks wonderful on the back of a jersey. Unfortunately, it presented some rather low-hanging fruit in Cuba due to his propensity for "... [trying] to make too many impossible plays." Errorbarruena, of course. If that nickname is any indication, Erisbel will need some seasoning in the minors.

Whether it's Gordon who sprints to second at about 0.713 hps (Hamiltons per second), Guerrero and what his agent --Scott Boras -- calls Dan Ugglaesque power (I paraphrased the Ugglaesque part), or one of the other baby birds hungry for vomit (gross, sorry), it should be interesting to see what the Dodgers can get out of second base this season.

The Crowded Outfield. It's almost become cliché to call it a cliché, but the Dodgers really do have a lot of outfielders. With Matt Kemp likely to begin the season on the disabled list, Andre Ethier will be LA's Opening Day centerfielder. His lead-tetherbal range will likely to cost them more than a few runs out there. Despite being hobbled for the better part of the last two season, Kemp will -- presumably -- be back soon. Carl Crawford could put together a healthy run, but he's been pretty banged up for a while too, so the team's depth could come in handy.

Pederson, 21, doesn't project as a superstar, but he's "a balls-out type of player with solid-average to above-average tools that he can bring into game action," according to Baseball Prospectus' Jason Parks. He's dropped some jaws this spring, and that could result in a promotion at some point ... or a future as the centerpiece of a midseason trade.

Chone Figgins and Scott Van Slyke will be braided into the shuffle as well. If one of the Dodgers' regular outfielders goes down for an extended period, Pederson could get the call.

The Dodgers are seven-to-one favorites to win the World Series this year, if you're into that sort of thing. They look like the most complete team in baseball at the moment. So, who knows? Maybe you'll septuple your money.

On the other hand, accurately predicting the World Series winner in March is only slightly more likely than your chances of winning a billion of Warren Buffet's dollars with your bracketological shot in the dark.

No matter what Cardinals fans say, money does win championships. They should know since they've outspent a sweeping majority of the league over the last few decades. It's hard to argue against money since only a handful of teams have won the World Series while finishing the season outside the top 10 in payroll since 1998, and only one team -- the 2003 Florida Marlins -- have won the Series in that span while finishing the season outside the top half. However, having the most money doesn't necessarily win championships. In fact, the team with the highest payroll in the league (the Yankees) has only won the World Series once since 2001.

Los Angeles is going usurp the title of the spend-happiest team in baseball this season, but that's the only title they are guaranteed.

Los Angeles has infield and outfield depth, and a few extra starters in case of injury. And they spent some serious money on galvanizing their bullpen this offseason as well. Their only real problem will be getting the right mix of players on the field. Not an easy thing to do, but they have more options than anyone, and they have a strong farm system that could come into play at the trade deadline if a need arises.

Manager Don Mattingly was pretty roundly criticized for his managing techniques during the playoffs last year, but that didn't stop the splurging Guggenheimers from extending his contract this winter. It might be hard for him to biff things too hard over the course of the regular season since his team is so flush with talent, but in the postseason, the margin for error drops drastically. Getting there is far from a certainty, but they have a pretty good chance. However, in order to win the World Series, teams have typically had to get hot at the right time.

The odds on how and when that happens are anyone's guess.