Last year, the Pittsburgh Pirates rode an MVP campaign from Andrew McCutchen and a Comeback Player of the Year Award from Francisco Liriano to their first postseason berth in 20 years. Can they do it again?

The right-hander is switching teams after being outrighted off the 40-man roster.

Following in the footsteps of Andrew McCutchen and Jose Tabata, Starling Marte is discussing an extension with the Pirates.

This one is obvious. McCutchen is young, athletic, likable, funny, and watching him run around the bases or the outfield, his dreadlocks flowing behind him, is pure baseball ecstasy.

McCutchen is the type of player Pittsburghians and baseball fans around the country have been looking for--a bona fide superstar in a market that is not Boston or New York. And sure, he may not win another MVP, but at the age of 27, and with a team friendly contract that has him signed through 2017, Pittsburgh fans should wake up every morning and thank whichever deity they believe in that they have a center fielder who has hit .322/.402/.531 over the last two seasons. In a lineup filled with question marks, McCutchen is about as steadying force as they come.

And because it's a pre-requisite, please enjoy McCutchen's appearance on Ellen:

It's also great (or depressing) to know that McCutchen, even in uniform, is recognized more often for that proposal than as the reigning Most Valuable Player. C'est la vie.

This is a long, roundabout way of saying that the last time that Edinson Volquez had an ERA+ over 100 was in 2008. And he wasn't even good through the whole season, his 2.29 ERA in the first half giving way to a 4.60 mark in the second.

After the Pirates saw Francisco Liriano earn his second comeback player of the year award last year, thanks to some voodoo work from pitching coach Ray Searage, pitching guru Jim Benedict, and the absurd pitch framing abilities of Russell Martin, they thought they could do it again, signing Volquez to a one year, $5 million contract.

The only problem, while Liriano had shown signs of promise during his time in the wilderness, Volquez has spent the last five seasons varying ineffectiveness, injury, and a performance enhancing drug suspension, posting a 4.94 ERA along the way.

Sure, the strikeouts are still there, and a 28-inning hot streak with the Dodgers at the end of last year gives the Pirates some hope, but with AJ Burnett gone, and top prospect Jameson Taillon being shut down with elbow discomfort, there is not a lot of wiggle room should Volquez struggle. That puts a lot of pressure on Gerrit Cole to continue looking like the ace he performed like at the end of last year and for Liriano to have his first ever back-to-back strong seasons.

If I was writing this yesterday, this section would have been about Andrew Lambo, assuming that the Pirates were going to give the larger side of the first base platoon to Lambo after he hit 33 home runs last season across three levels. But after also striking out in nearly 30% of those plate appearances and hitting an absolutely dreadful .095/.174/.095 line in spring training, he was sent down to AAA this morning.

That means the 30-year-old Travis Ishikawa, with a career .721 OPS and a total of 194 major league plate appearances since 2010 will open the season getting half the at-bats at first base. And it's not like he's particularly inspiring against right handed pitching, posting a career. 262/.329/.408 line against them, numbers that are well below average from a first baseman. (For the curious, the average OPS for a first baseman last season was .773)

For a team that finished 20th in runs in 2013, and with a rotation and bullpen unlikely to match the highs of 2013, the Pirates will need to find a way to score more runs. The answer, sadly, is probably not Travis Ishikawa.

Naturally, when talking about the Pirates need for runs, Gregory Polanco's name is on the lips. The 22-year-old right fielder is coming off a Dominican League Rookie of the Year and MVP award, having hit .285/.356/.434 across three levels last season.

Assuming that the Jose Tabata/Travis Snider not-a-platoon in right field fails to inspire in their second year together, the Pirates are expected to call up the outfielder once his Super 2 service time has successfully passed by.

It's a lot to expect of a rookie to come up and immediately succeed, especially as Polanco hasn't finished growing into the power that is one day expected of him, and because the rate of attrition for prospects is absurdly high. Tabata and Snider were both looked at as future outfield stalwarts and that failed to pass. For the Pirates to contend this year, Polanco will have to buck the trend.

Unfortunately, barring a World Series victory, there is no way that Pittsburgh can surpass the kind of world-uniting magic of last season. After 20 years without a postseason berth or a .500 record, the Pirates won 94 games and reached the postseason, managing to make black uniform tops cool when they 'blacked out' PNC Park for their postseason games.

Unfortunately, GM Neal Huntington, who deserves plenty of credit for assembling this team, watched his offseason plan blow up in his face like he was Wile E Coyote. Rather than giving AJ Burnett a qualifying offer, the team reportedly low-balled him, eventually offering him $12 million to the Phillies' $16 million. Had they instead decided not to sign Volquez, using that money in an offer for Burnett, they could have had a better pitcher at a lower price.

And after allowing Garrett Jones to leave for Miami and only $5 million, the team missed out on James Loney, and now enter the year with question marks in both right field and first base. While Andrew McCutchen and Pedro Alvarez would be expected to anchor the lineup regardless of who was acquired this offseason, it's asking a lot of them to repeat as MVP and home run leader, respectively.

The rotation is also shaky, Francisco Liriano and Edinson Volquez both big question marks and the bullpen, lead by Jason Grilli and Mark Melancon, will have a hard time putting together five pitchers with ERAs below 3.00. Credit Clint Hurdle for his quick hook, rarely leaving in his pitchers longer than necessary, but without a breakout campaigns from Jameson Taillon and Gregory Polanco, the Pirates could find 2014 to not be the victory lap Pirates fans were hoping for.

Andrew McCutchen, happily engaged, somehow improves upon MVP campaign. Pedro Alvarez finds a way to cut down on his strikeouts without sacrificing his power and the Pirates extend Starling Marte right before he breaks out, putting a second McCutchen in the outfield. Francisco Liriano has another strong season, Gerrit Cole continues his ascent to acehood, and Edinson Volquez performs ably for the first time this decade. The bullpen holds together, Jason Grilli and his stringy hair having an encore performance, and the Pirates somehow find a way to squeeze Jeff Karstens and his pitch face back on the team for one more year as a personal favor to baseball fans everywhere. 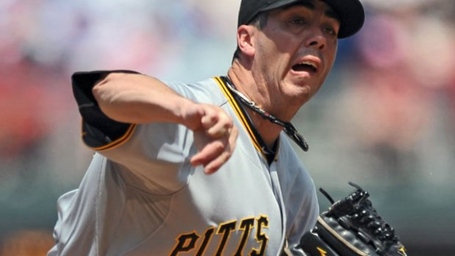 Andrew McCutchen plays well, but isn't otherworldly. Pedro Alvarez's strikeouts catch up to him and it's revealed that he's the second coming of Mark Reynolds, his defensive struggles and inability to make contact sapping him of his value. Gregory Polanco plays like the rookie he is and Jameson Taillon's elbow injury is revealed to be a much larger issue. Francisco Liriano pitches more like the 2011 and '12 version, Edinson Volquez is who we thought he was, while the bullpen collapses. Travis Ishikawa does surprise the world and hit 30 home runs though. Even in a bad year, something weird has to happen.

In the end, this is a Pirates team that has a strong core and the talent to win not only this year, but possibly through the end of the decade. Unfortunately, for a team whose window is now, there are an awful lot of holes.