Last season, the Cardinals once again were successful, winding up in their fourth World Series in the last ten years. Since the Cardinals seem incapable of having an outright bad year, just how good can they be in 2014?

With Yu Darvish likely to begin the season on disabled list, the banged up Rangers agreed to terms with Baker and claimed tight hander Seth Rosin from the Dodgers.

The reliever is heading to St. Louis after being released by the Indians last week.

This year, the Cardinals are playing a game of Guess Who, re-arranging their depth chart to fit in the most useful pieces. With Peter Bourjos in center, the injury prone Allen Craig moves to right field to give the husky hero Matt Adams first base. And after leading the league in hits, runs, and doubles, Matt Carpenter (fresh from a six-year contract extension) returns to his original position of third base so Kolten Wong can start at second.

But Wong, after hitting .303/.369/.466 in AAA last year, struggled when called to the majors last year, hitting .153/.194/.169 in extremely limited time. But Wong, known for impressive baseball instincts and a high floor if not All-Star ability (which is what every Cardinals player seemingly possesses before blossoming into a star), has blistered the ball to the tune of a 1.125 OPS in spring training and been named the starting second baseman.

The defensively sublime Mark Ellis will be around if anything goes wrong, but if Wong hits as expected this year, you will be hard pressed to find a flaw in the Cardinals starting lineup.

After watching Pete Kozma struggle so mightily with the bat that it didn't matter what he did with the glove (.217/.275/.273 in 2013) and with Daniel Descalso being no one's idea of a first option, the Cardinals went out and addressed one of their few issues of need, signing Jhonny Peralta to a four year, $53 million contract.

While that kind of money makes sense for a player coming off a year like Peralta's (.303/.358/.457), Peralta is not only going to be 32 this season, a time when many shortstops are being moved to corner positions, but Peralta is also coming off a 50 game suspension for PED use. Which complicates things a little.

The defensive metrics are also split, UZR generally viewing Peralta as an exceptional infielder while DRS views him as average to perhaps below. If Peralta can give the Cardinals anything that resembles his 2013 numbers, the Cardinals will happily take it.

Acquired from the Los Angeles Angels in exchange for World Series hero David Freese, Peter Bourjos could be the steal of the offseason. The speedy center fielder is such a good defender that he was able to shift Mike Trout off the position to give you a taste of his abilities. And though he only topped 200 plate appearances in a season once (2011), that year Bourjos posted a .765 OPS along with 12 home runs, a league-leading 11 triples, stealing 22 bases along the way.

While Jon Jay was a fine player to stick in center, able to hold his own with the bat, Bourjos' vastly superior outfield defense should make him an immediate upgrade regardless of how much he hits. And with the aging Matt Holliday and Allen Craig in right field, the Cardinals will really be counting on Bourjos to catch roughly (does math on calculator) 78% of all fly balls.

While the Cardinals rotation should be strong, anchored by the forever a bridesmaid-never-a-Cy-Young, Adam Wainwright being backed up by Michael Wacha, Joe Kelly, and Lance Lynn, all eyes will be looking to former top prospect Shelby Miller.

Last year, through Miller's first 86 innings, he had a 2.08 ERA and was striking out over a batter per inning, looking like the runaway candidate for Rookie of the Year. But over his last 87 innings, Miller's ERA rose to 4.03, watching his strikeouts drop and his walks rise, leading to Miller receiving just one inning of postseason work.

While the assumption was that the rookie was tiring down during the stretch, the larger concern is Miller's command of his breaking pitches. Leading all qualified pitchers in fastball usage last year with 73%, Miller had below average whiff rates for all of his breaking pitches, indicating that he may not have the necessary repertoire to be a front-line starter. With Carlos Martinez, arguably the pitcher with the best stuff on the team, waiting in the bullpen for an opportunity in the rotation, Miller may not have a long leash in 2014.

It's the Cardinals, the closest thing baseball has to a dynasty over the last decade. This is also a team that through devilry or simply brilliant scouting, routinely turns late round draft picks into solid major league regulars. It makes no sense and threatens the very realm in which we exist because it just shouldn't be.

Looking at the 25 man roster, the Cardinals may also have the most complete team in the majors. While there are a few problem areas, question marks like Peter Bourjos or Kolten Wong's ability to hit or if Allen Craig can stay healthy, but the Cardinals have solutions for all of those. If Bourjos' defense can't make up for his hitting, there's Jon Jay. Mark Ellis is there to spell Kolten Wong, and if Allen Craig gets injured, Oscar Taveras is only a phone call away.

The only real area of concern is the rotation, with Lance Lynn, Joe Kelly, and Shelby Miller all having some marks against them, but with an ace like Adam Wainwright, those concerns are somewhat mitigated.

The assumption, just like every other year in recent memory, is that the Cardinals are simply too good and too smart to struggle and that they'll finish the year with their eighth postseason berth in the last eleven years.

Matt Holliday continues not to age, Peter Bourjos catches everything that's hit near the outfield, and Allen Craig somehow hits even better with runners in scoring position. Yadier Molina wins an MVP, hitting home runs and stealing extra strikes in equal abundance while Adam Wainwright finally wins a Cy Young award, Shelby Miller proves that he has a second pitch and Oscar Taveras isn't even needed, no spot of injury or ineffectiveness opening up for the Minor League Guy. 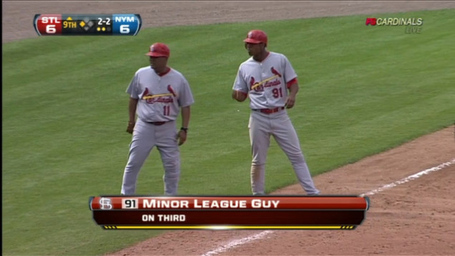 Allen Craig's bones crumble to dust, Matt Holliday hits like the 30-something year old that he is, and Kolten Wong can't hit period. Yadier Molina decides he'd like to try out playing another position and everyone not named Adam Wainwright struggles. Trevor Rosenthal can no longer find the plate with his fastball and Carlos Martinez doesn't like pitching out of the bullpen. Jhonny Peralta is revealed to be three little kids in a trenchcoat and the Cardinals have to resort to using Pete Kozma again.

But let's be honest--barring the apocalypse, the Cardinals are in for another fine season.